America's No. 1 Convenience Store - 7-Eleven - Is on the Go with Expanded Fresh Foods Menu

March is National Nutrition Month and people have even more of a reason to start making healthier food choices with 7-Eleven's expanded fresh foods line of wraps, snacks and salad. 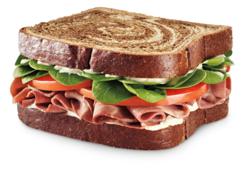 According to the best-selling book, Fast Food Nation, about one-quarter of the U.S. population eats fast food every day and with March being National Nutrition Month, people have even more of a reason to start making healthier food choices.

Downloadable b-roll and photos are available to the media at: http://magicbulletmedia.com/MNR/711FreshToGo/

About 7-Eleven, Inc.
7-Eleven, Inc. is the premier name and largest chain in the convenience retailing industry. Based in Dallas, Texas, 7-Eleven operates, franchises or licenses more than 10,000 7-Eleven® stores in North America. Globally, 7-Eleven has some 50,000 stores in 16 countries. During 2011, 7-Eleven stores generated total worldwide sales close to $76.6 billion. 7-Eleven has been honored by a number of companies and organizations recently. Accolades include: #2 on Forbes magazine’s 2011 list of Top Franchises for the Money; #3 spot on Entrepreneur magazine’s Franchise 500 list for 2012, #3 in Forbes magazine’s Top 20 Franchises to Start, and #2 in Franchise Times Top 200 Franchise Companies. 7-Eleven was named No. 3 on Fast Company magazine’s 2013 list of the “World's Top 10 Most Innovative Companies in Retail.” Hispanic Magazine named 7-Eleven among its Hispanic Corporate Top 100 Companies that provide the most opportunities to Hispanics. 7-Eleven received the 2010 Retailer of the Year honor from PL Buyer because of the company's private-label brand initiative. 7-Eleven is franchising its stores in the U.S. and expanding through organic growth, acquisitions and its Business Conversion Program. Find out more online at http://www.7-Eleven.com.