Octagon 88 Resources Inc. is pleased to announce the coring activity on the first planned well was successfully completed and the cores taken have been transported to AGAT Labs in Calgary for analysis. 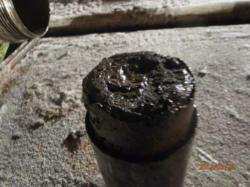 The samples seen from the cores indicate the oil in the company's sands contain Lighter Heavy Oil with gas traces which should assist with mobilizing the oil to the well bore.

With the approximately 30 meters of oil bearing pay zone, the company has made strong progress toward our scalable production plants objective, star.

Originally Published March 18, 2013: Coring began at about 417 meters and continued to 459 meters, the targeted bottom of the Bluesky/Gething formation. Eight meters of excellent quality cap rock necessary for enhanced recovery methods, was cored followed by 30 meters of various types of oil bearing sands including those which may produce with primary production without the use of SAGD or CSS methods. The primary production is similar to neighboring oil majors and will bring on production much quicker while substantially reducing CAPEX costs of the project.

The samples seen from the cores at location indicate the oil in the company’s sands contain Lighter Heavy Oil with gas traces which should assist with mobilizing the oil to the well bore. The company is awaiting the results of laboratory analysis expected in two to three weeks to confirm the porosity, permeability and viscosity (type of oil). This will be followed by extensive simulation work to establish the best recovery method. Further development plans of the Bluesky/Gething zones will be forth coming.

“From seismic analysis, the channel is expected to be about 500 to 800 meters in width at the core location. With the approximately 30 meters of oil bearing pay zone, the company has made strong progress toward our scalable production plants objective, starting at 1’200 barrels a day and growing the Bluesky project to a potential of 20,000 barrels a day production. Further developments are underway moving to 3D seismic which will further map the zone and provide multiple horizontal drilling locations targeting production in late 2013.”

With the success of this first core well, the rig is demobilized and is moving to the second location which is targeting the Elkton Debolt where from the 25 wells drilled regionally it is a well mapped and an already known major resource. The company’s first well in this zone will target the sweet spot on the erosional edge of the Elkton Carbonates which recently came to the forefront with the success of Laricina and Osum announcing commercial operations from a Joint Venture on the erosional edge of the Grosmount Carbonates using newer technologies. Laricina, Osum, Athabasca Oil, Sunshine Oil and two majors, Shell and Husky are also advancing their Grosmount Carbonate projects. This will be the first in the Peace River area and combined with our Blue Sky Gething conventional heavy project the company has been positioned to grow using cash flow to develop the larger carbonates and thus reducing the need to go to the capital markets for heavy dilutive share issuance to reach production.
The second core well with be spudded shortly followed by coring and the cores taken for processing in the labs to confirm oil quality, porosity, permeability as well the best recovery method of the Elkton Debolt.
The funding for these coring operations was provided by Zentrum Energie Trust Ag, a private equity fund in Switzerland focusing on mezzanine finance. Zentrum provided a credit facility to CEC North Star Energy Ltd. Zentrum is the largest shareholder of Octagon 88 Resources holding a 52 % ownership of the company.

Octagon 88 Resources - Alberta
In 2012 / 2013 Octagon 88 Resources, Inc. acquired substantial light and conventional heavy oil assets in Northern Alberta. The acquired projects have been substantially de-risked which leads the company to emerge as a development stage oil and gas company as of January 22, 2013. The company’s intention is to grow shareholder value through mergers and acquisitions opportunities available to the company. The current program schedule entails working with the operator of these properties to bring on production and cash flow through the company’s direct working
interests, and indirect investments spread throughout the projects.

CEC North Star
CEC North Star Energy Ltd is a non-public Calgary based Energy Corporation with a substantial oilsands lease holding in the Peace River block of north western Alberta Canada.
CEC North Star has acquired sixty-one (67) sections respectively 39,040 acres of leaseholds with a prospective resource of 873 MM bbl (Best Estimate) PIIP in the Elkton Debolt formations based on a 25 section independent analysis. The same independent petroleum engineering firm conducted a feasibility study 139 Mil (NPV @ 10% fully risked) based on a typical four sections development of the Elkton/Debolt. In addition the property is prospective for Bluesky/Gething oil sands formations which may lead to early primary production development similar to other projects in the Peace River Block offering significant production potential.
CEC North Star has entered into joint venture on adjoining properties consisting of 23 sections or 14,720 acres which may increase PIIP (Petroleum Initially in Place) to in excess of three (3) billion barrels.
CEC North Star goals of ultimately 200,000 bbl/d of bitumen from these lands and objectives are to create value by developing these oilsands properties using scalable project development targeting multiple 5-10,000 bbl/d facilities with stakeholder involvement at every stage – Environment, Occupational Health and Safety are of paramount concern. Use of known technologies while remaining flexible to adopt new processes to maximize recovery of oil in place while reducing operating costs and a relatively quick schedule and lower capital costs compared to other oilsand projects resulting in maximum return on capital invested and quicker shareholder returns.

Forward-looking Statements:
This press release contains forward-looking statements concerning future events and the Companies’ growth and business strategy. Words such as "expects," "will," "intends," "plans," "believes," "anticipates," "hopes," "estimates," and variations on such words and similar expressions are intended to identify forward-looking statements. Although the Companies believes that the expectations reflected in such forward-looking statements are reasonable, no assurance can be given that such expectations will prove to have been correct. Forward looking statements in this press release include statements about our drilling development program. These statements involve known and unknown risks and are based upon a number of assumptions and estimates that are inherently subject to significant uncertainties and contingencies, many of which are beyond the control of the above mentioned Companies. Actual results may differ materially from those expressed or implied by such forward-looking statements. Factors that could cause actual results to differ materially include, but are not limited to, the timing and results of our 2013 drilling and development plan. Additional factors include increased expenses or unanticipated difficulties in drilling wells, actual production being less than our development tests, changes in the Companies business; competitive factors in the market(s) in which the Companies operate; risks associated with oil and gas operations in the United States; and other factors listed from time to time in the Companies’ filings with the Securities and Exchange Commission including the Company's Annual Reports on Form 10-K for the year and their recent Quarterly Reports on Form 10-Q. Both Companies expressly disclaims any obligations or undertaking to release publicly any updates or revisions to any forward-looking statements contained herein to reflect any change in the Companies’ expectations with respect thereto or any change in events, conditions or circumstances on which any statement is based.