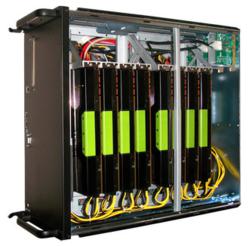 Due to the flexible design of the GB5400 GPGPU blade server, each system can support eight GPU cards such as the NVIDIA® Tesla®, Quadro® and GeForce® product lines, including the newly released GeForce® GTX™ TITAN cards.

GPU Technology Conference – Cirrascale Corporation®, a premier developer of build-to-order, independent blade-based computing and storage infrastructure for conventional and modular data centers, today announced the next generation of its GB5400 blade server supporting up to eight GPU cards. Utilizing a pair of the company’s proprietary 80-lane PCIe switch-enabled risers, the GB5400 supports up to eight discrete GPGPU cards in a single blade.

The proprietary riser developed by Cirrascale enables increased bandwidth and lower latencies between GPU cards than are possible in traditional systems. By enabling multiple GPUs to communicate on their own PCI bus, free of the need for host CPU intervention, GPUs can be clustered into a “micro-cluster”, sharing a single memory address space. The GB5400 server and PCIe switch-enabled riser card are available immediately to customers via purchase and to partners through licensing opportunities.

Due to the flexible design of the GB5400 GPGPU blade server, each system can support eight GPU cards such as the NVIDIA® Tesla®, Quadro® and GeForce® product lines, including the newly released GeForce® GTX™ TITAN cards. The GeForce® GTX™ TITAN is powered by the fastest GPU on the planet and contains 2,668 GPU cores, delivering 4.5 Teraflops of single precision and 1.3 Teraflops of double precision processing power. When placed in the Cirrascale BladeRack® 2 XL platform, the solution scales to provide 124.8 Teraflops of double precision processing power in one rack making it one of the densest High Performance Computing and GPU-accelerated cloud computing solutions available.

“We have redesigned the GB5400 to handle the latest cards from leading GPU providers, including NVIDIA and their wide assortment of high-end GPU cards,” said David Driggers, CEO, Cirrascale Corporation. “Our customers and licensed partners in cloud and High Performance Computing are asking for this increased density and performance, while maintaining the ability to scale the solutions they choose. We’re confident that the GB5400 meets these needs, and in fact, surpasses them.”

The Cirrascale GB5400 blade server, including the entire GB series line of GPGPU solutions, as well as the Cirrascale proprietary PCIe switch-enabled riser, are immediately available to order and are shipping to customers now. Licensing opportunities for these technologies are also available immediately to both customers and partners.