As of March 2013, more than 500 people have collectively named The Great Pyramid of Giza as #1 on Ranker's "Best Historical Landmarks to See Before You Die" list, a crowd-sourced list on the consumer opinions website, Ranker.com. 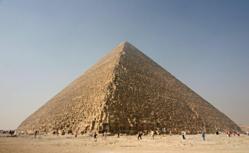 The Colosseum usually ranks low in must-see attraction lists, even though it's awesome.

The Great Pyramid of Giza recently rose to #1 on Ranker's "Best Historical Landmarks to See Before You Die" list, a crowd-sourced list on the consumer opinions website, Ranker.com. More than 500 people have voted on this list as of March, 2013. The Great Sphinx of Giza also appears at number six, making Egypt the most sought after destinations inside the top 10.

Travel writer Danielle Dauenhauer, stated: "The Colosseum usually ranks outside the top 10 in must-see attraction lists, even though it's awesome," Said Dauenhauer, "but since 2010 visitors have been allowed in the gladiator tunnels which makes the experience pretty epic."

See the full List Of Historical Landmarks To See Before You Die, as well as 1000s of other Places and Travel lists at Ranker.com.