RevLabs Sponsored Karo “The Heat Parisyan” to Fight in Bellator 95 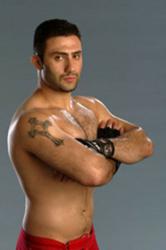 Karo “The Heat” Parisyan is scheduled to step into the MMA arena once again on April 4th at Bellator 95. Parisyan appears on the main card where he is set to test his skills against fellow welterweight Rick “Genghis” Hahn.

Parisyan, former UFC fighter and WEC Welterweight Champion, makes his Bellator debut after two impressive first-round submission victories with Gladiator Challenge. The two submissions bring his career record to 22-9-0. Parisyan looks to continue his reign of domination against opponent Rick Hahn. Rick Hahn, former Olympic competitor, enters the ring for the first time since his submission loss at Bellator 85 earlier this year. Hahn’s loss in early 2013 comes after a series of wins in 2012, bringing his career record to 14-2-0.

In his Bellator debut, Parisyan looks to continue the success he found at the end of 2012. Following set backs and injuries in recent years, Parisyan stated he needed “to only focus on Karo getting back to Karo.” He certainly appears to have done just that in recent fights. In addition to mentally re-focusing Parisyan has also focused on intensive training, and has aided this with workout supplements from San Diego based Revolution Laboratories (RevLabs).

RevLabs formed in 2012 when three avid fitness professionals and MMA enthusiast were unsatisfied with current workout products on the market. Feeling that they could offer a full comprehensive product line, the founders launched RevLabs to provide the best products for the best athletes. Among the products offered, Parisyan uses both MuscleRev, a pre-workout supplement aimed to boost both mental and physical energy while providing essential amino acids and additional nutrients to muscles, and ProRev, a whey protein powder specifically designed for lean muscle mass gains.

The combination of renewed mental focus, physical dedication, and proper dietary supplements create a strong outlook for Parisyan in the upcoming bout. The fight will air live on SpikeTV April 4th at 10PM/9 Central.