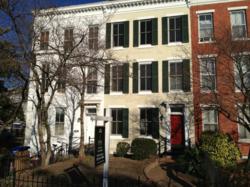 "This new facility will help form Christian statesman, as members and staff access a library of 2000 volumes drawn from Dr. Kennedy's personal collection and sermons preached during his lifetime.

The D. James Kennedy Center for Christian Statesmanship, a Christian ministry to legislators, staffers, and interns on Capitol Hill, has acquired a permanent home two blocks from the U.S. Capitol building.

The new facility, a stately three-story row house built in 1890, will be the site of ministry activity and house the new D. James Kennedy Library on Capitol Hill. Renovations are already underway on the spacious structure in preparation for the grand opening in June.

“We are absolutely thrilled to have the new center for ministry so close to where lawmakers and their staff work,” said Dr. John B. Sorensen, President of Evangelism Explosion International, the parent organization of the Center for Christian Statesmanship. “This elegant building will be an enormous asset to our outreach on Capitol Hill.”

Dr. Sorensen noted that the new D. James Kennedy Library “will help form Christian statesmen, as Members and staff access a library of some 2,000 volumes drawn from Dr. Kennedy’s personal collection, as well as about 2,000 sermons he preached during his lifetime.”

Founded in 1995 by the late D. James Kennedy, a minister, author, and evangelical leader, the Center for Christian Statesmanship has impacted thousands of lives by bringing a gospel witness, Christian discipleship, and a vision for Christian statesmanship to leaders in Washington.

The Center’s Executive Director George Roller leads a wide range of ministry activities, including “Politics and Principle Luncheons” at which Christian Members of Congress share their faith testimony; Bible studies for legislators, staffers and interns; special intern events, such as backyard barbecues, where hundreds of interns gather in a Christian setting; and special lectures where key Christian leaders and thinkers share a Christian witness to the Capitol Hill community.

“The Center does not do any sort of political action,” said Dr. Sorensen, leader of Evangelism Explosion which saw nearly eight million professions of faith in Christ worldwide in 2012. “We simply minister to Members of Congress, their staff, and those that come and serve as interns on Capitol Hill. It is our hope and prayer to see a dramatic expansion of the Center’s outreach with this wonderful new facility.”