Messi is one of the most well-known sports figures around the world and is one of the best soccer plaeyrs to ever play. Adidas has introduced Messi as their new soccer icon. 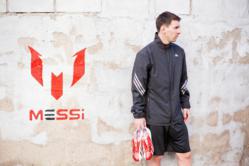 It is exciting to see Messi have his own collection since Beckham was the soccer icon during my generation for Adidas.

Adidas has been a leader in the soccer industry for decades. Names like Franz Beckenbauer in the earlier days to David Beckham in recent memory, were the men who helped market Adidas on and off the pitch. As a new generation of soccer players enter the world, Adidas is making sure to capitalize on the greatest stock out there who is Lionel Messi.

Lionel Messi graces every soccer kid's wall full of posters and their wardrobe of Barcelona jerseys. No matter where you go in the world, chances are that someone is wearing a Messi jersey or at least know who Messi is. He has scored over 300 goals for FC Barcelona, won the FIFA Ballon d'Or 3 times, and has played for the Argentina National Team since 2004. These are just a few of Messi’s many achievements in soccer. Messi has been compared to Pele and at times, called the greatest to ever play soccer.

Messi has been loyal to Adidas over the years and it has paid off. Adidas has inked Messi in a Signature Collection deal that should help increase the stock of each. Adidas unveiled Messi's collection in March 2013 with lots of excitement. This collection revolves around the F50 adizero cleat with one red stud among the other ten white studs symbolizing his role amongst the other 10 players on his team. The cleat is set off with bright white and red color schemes on a super lightweight chassis. Besides the cleats, the collection offers apparel, balls and more. The collection captures everything a soccer player would need on and off the field with the Messi logo clearly labeled on all products. "It is exciting to see Messi have his own collection since Beckham was the soccer icon during my generation for Adidas.” said Eric Barden.