Liberian activist and women's rights advocate Leymah Gbowee will speak with Maine high school students during a special event at the Portland, Maine, headquarters of CIEE, the world leader in international education and exchange. 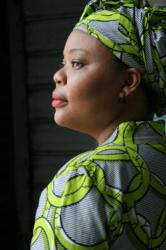 CIEE's hope is that Gbowee’s story of leadership will inspire the next generation of leaders located right here in Maine to get excited about cultural exchange and diversity.

On Thursday, March 21, CIEE will host Portland-area high school students and their teachers for a candid conversation with Liberian peace activist and 2011 Noble Peace Prize winner Leymah Gbowee. Gbowee will share her personal story of promoting peace, security, and girls’ and women’s rights, education, and leadership around the globe. At the event’s conclusion, Portland City Mayor Michael Brennan will present Gbowee with the key to the city in honor of her lifetime achievements.

As the world leader in education and exchange with headquarters in Portland, Maine, CIEE is committed to providing Maine’s students with international experiences right in their own community. “Events such as the conversation with Leymah Gbowee provide an important opportunity for Maine’s students to interact with global leaders,” stressed CIEE President and CEO James P. Pellow, Ed.D. “This exposure to differing perspectives and cultures is critical to preparing students to live and succeed in a diverse, globally connected world. Our hope is that Gbowee’s story of leadership will inspire the next generation of leaders located right here in Maine to get excited about cultural exchange and diversity.”

This event is part of the University of Maine School of Law’s Justice for Women Lecture Series, currently in its second year. The series brings a distinguished speaker to Maine annually to contribute to a global conversation about justice for women and girls in the developing world, offering a perfect complement to CIEE’s mission to foster global understanding and intercultural knowledge.

Leymah Gbowee
Gbowee was awarded the 2011 Nobel Peace Prize for her part in leading the Women of Liberia Mass Action for Peace, which brought together Christian and Muslim women in a nonviolent movement. This effort helped end the Liberian civil war in 2003 and contributed to the election of the first female head of state in African history.

Among her many additional achievements, Gbowee is founder and president of the Gbowee Peace Foundation Africa, and co-founder and executive director of Women, Peace and Security Africa. Today, she is on the board of directors for the Gbowee Peace Foundation USA, the Nobel Women’s Initiative, and the PeaceJam Foundation, and is a member of the African Women Leaders Network for Reproductive Health and Family Planning. Her accomplishments are chronicled in the 2011 memoir, Mighty Be Our Powers, and in the documentary film, Pray the Devil Back to Hell.

CIEE
A nonprofit, non-governmental organization, CIEE is the world leader in international education and exchange. For 65 years, CIEE has helped thousands of students, professionals, and educators gain the knowledge and skills necessary to live and work in a globally interdependent and culturally diverse world by offering the most comprehensive, relevant, and valuable exchange programs available.