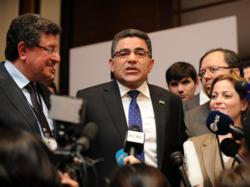 Ghassan was instrumental in establishing MLFA's mission to defend the integrity of the American justice system, and his election to such an important position is a testament to his selfless commitment to justice and freedom.

Representatives from the Muslim Legal Fund of America, a national civil liberties defense organization, are congratulating Ghassan Hitto, one of the organization's co-founders, on his election Monday as interim prime minister of the Syrian opposition's transitional government.

Mr. Hitto helped establish MLFA in 2001 in the wake of new controversial laws and law enforcement programs that unfairly target Muslims and erode civil liberties in America. He left his successful information technology career in November to help bring humanitarian aid to Syrians affected by the civil war and to assist the revolution. On Monday, the New York Times reported that Syria's opposition coalition elected Mr. Hitto as the "first prime minister of an interim Syrian government."

Khalil Meek, Executive Director of MLFA, said that Mr. Hitto's efforts in Syria are characteristic of his charitable nature.

"Ghassan was instrumental in establishing MLFA's mission to defend the integrity of the American justice system, and his election to such an important position is a testament to his selfless commitment to justice and freedom," said Meek. "It is our hopes that peace will be restored and democracy established as we continue to keep the people of Syria in our prayers."

Obaida Hitto, the son of the new interim prime minister and a former MLFA employee, joined the rebels in May to make informative videos about the rebellion and to assist with humanitarian efforts inside Syria. Obaida was injured in September when Assad's forces attacked the area where he was filming, but has since recovered and rejoined the rebels.

The Muslim Legal Fund of America (MLFA) is a national civil liberties legal fund that defends the U.S. Bill of Rights by supporting legal cases involving civil liberty encroachments. Established in 2001, MLFA has defended freedom of speech, freedom of religion, right to a fair trial, due process of law and many of our nation's civil liberties. To learn more about MLFA, visit their website at http://www.mlfa.org.