The Oscars: a Memorable First-time Experience for Lyoness America! 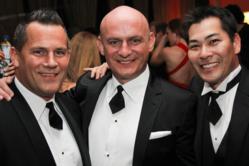 Mario, Hubert and Matt at Lyoness Oscar after party

"When we were invited to become a sponsor of an Oscars after party benefiting St. Jude Children's Research Hospital we were enthusiastic."

Lyoness America participated as a sponsor of the 2013 Oscar Awards After Party held in Beverly Hills, California on February 24, 2013. The first sponsorship of this kind for Lyoness, the organization was thrilled to partake in a celebratory event while also contributing to a great cause. “When we were invited to become a sponsor of an Oscars after party benefiting St. Jude Children’s Research Hospital we were enthusiastic about participating,” stated Mario D. Hoffmann, CEO of Lyoness America.

“Lyoness has its own not-for-profit Child and Family Foundation, so lending support for a worthwhile endeavor coincides with the company’s corporate principles of giving back and making a difference,” stated Lyoness USA Director of Marketing and Communications Myrna Y. Vaca.

In addition to the charitable benefits associated with sponsoring the Oscars After Party, Lyoness used the event as a reception for some of their key leaders in America. Not only was the event attended by Lyoness CEO Mario Hoffmann and other executives from the Lyoness USA management offices in Miami and the Lyoness USA office in New York City, but Lyoness founder Hubert Freidl from the Lyoness International corporate offices in Graz, Austria also attended.

As part of the sponsorship, The Lyoness Cashback Card was included in the Oscars After Party Celebrity Gift Bags. The Cashback Card is recognized by more than 29,000 Loyalty Merchants in 43 countries worldwide. Lyoness Membership is free, which is only one of the reasons Lyoness has become such a rapidly growing “shopping community,” now representing more than 2.7 million members.

“This is our tenth year of doing business internationally, but we are relatively new to North America,” says CEO Mario D. Hoffmann. “That’s another reason why events such as the Oscars provide a great stage on which to present Lyoness.”

Lyoness is an international sector spanning shopping community as well as a Loyalty Rewards Program. It is active in 43 countries worldwide, including the USA, Canada, and Brazil. Currently, more than 2.7 million Members use the Lyoness Benefits at 29,000 Loyalty Merchants worldwide. You can find further information at http://www.lyoness.com.