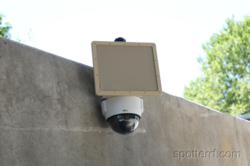 SpotterRF, in partnership with Sensei Solutions, a leading Electric Utility Solutions provider, today announced joint surveillance technology test results that show a radical reduction in the number of false alarms, the bane of intrusion detection and the security industry. SpotterRF teamed with Sensei Solutions to develop this revolutionary perimeter security approach to solve the problem for organizations that monitor hundreds of thousands of outdoor sites and dealing the torrent of false alarms that occur everyday. Combining SpotterRF radar with Sensei Mastermind, the sensor fusion software designed by Sensei Solutions, false alarms were reduced to zero after processing 77,000 events generated during an eight week trial period.

“Radar and sensor fusion is a game changer for perimeter security,” stated Ashley Campbell, CEO for Sensei Solutions. “With increasing intruder threat levels for critical infrastructure such as airports and electric substations, this new approach reduces costs and public risk associated with these environments. SpotterRF is a perfect fit because of its low cost, accuracy and reliability. ”

Sensor Fusion is a relatively new advancement in perimeter security. Sensor fusion operates by analyzing the sensors FOV’s and processing the alert correlation rules from two or more sensors in a given protection zone. The sensors used in Sensor Fusion deployments include such sensors as cameras running video analytics, radar, passive infrared (PIR) motion sensors, door/window contact sensors and others. If an individual device alarms and the threshold for correlation among the combined / layered sensors is not met, the system suppresses the alarm. Only when enough correlated alarms meet the threshold are security personnel notified and presented with the full alarm detail.

Sensei Mastermind, the sensor fusion software, developed by Sensei Solutions, is the brains of the operation and is capable of integrating signals from hundreds of devices and thousands of sites simultaneously. Over the eight week trial the combined number of sensor signals topped 77,000, an average of 1300+ a day. With that many alarms, the deployment configuration of devices tested would prove useless if each alarm required human review and response. However, after Sensor Fusion screening, only 973 "true" alarms surfaced during the trial, an average of less than 20 alerts per day. Each of these validated alarms was confirmed as viable detections, meaning there was a vehicle, person or animal that tripped the fused alarm.

“The ramification of this test is that now there is a viable, cost effective option for companies and governments that have large numbers of outdoor sites to monitor,” stated Logan Harris, SpotterRF CEO. “Dramatically reduced false alarms mean millions of dollars in potential savings, greater public safety, and reduced load on first responders and local police.”

About SpotterRF
SpotterRF provides the world’s most advanced compact surveillance radar (CSR) system for perimeter security and force protection. Made in the USA and engineered for extreme conditions, SpotterRF technology is the most compact, light-weight, energy efficient, and cost-effective radar for elite war-fighters and critical infrastructure requirements. For a data sheet, visit http://spotterrf.com/commercial.html.