NETE has been selected as a 2013 Top Business Award recipient by DiversityBusiness.com and will be honored at the 13th Annual National Business Awards Ceremony and Conference being held April 24-26, 2013 in Las Vegas, Nevada. 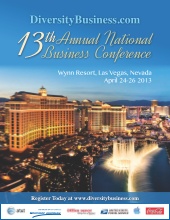 NETE has distinguished itself as one of the leading entrepreneurs in the United States and most deserving of this award and recognition.

Since DiversityBusiness.com established the “Top Businesses in America” award program in 1999, the program has become one of the nation’s most prestigious business awards. The program is designed to recognize and honor individuals who have proven themselves with exemplary ability as a world class community of entrepreneurs that transform the way people live and move the economy forward. The goal in recognizing these businesses and entrepreneurs is to raise awareness for these outstanding organizations.

The 2013 Top Business Awardees will be celebrated at the 13th Annual National Business Awards Ceremony and Conference being held at the Wynn Resort in Las Vegas on April 24-26, 2013. The three day event is expected to bring together over 1,000 entrepreneurs, corporate, government and educational executives from America's "Top Businesses" and America's "Top Fortune 500." Not only will the conference honor the achievements of NETE and other elite organizations, it will feature presentations and workshops conducted by industry experts and will also provide numerous opportunities for attendees to network with business leaders from all over the country.