TAG Oil reports Sidewinder exploration success with the drilling and completion of the Sidewinder-A5 and Sidewinder-A6 step-out wells. TAG is also pleased to announce that Mr. Randy Toone, P. Eng. will be joining TAG in New Zealand. 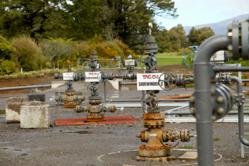 We have had excellent success with our shallow Taranaki drilling program...

TAG Oil Ltd. (TSX: TAO) and (OTCQX: TAOIF), is pleased to report that the Company has continued its exploration success in the 100% owned Sidewinder oil and gas field (Petroleum Mining Permit 53803) with the drilling and completion of the Sidewinder-A5 and Sidewinder-A6 step-out wells.

Consistent with the original four Sidewinder discovery wells drilled in the field to date, both wells encountered similar quality reservoir sands within the Mt. Messenger Formation at ~2000 meter depth.

This new phase of oil and gas exploration drilling has been initiated 22-months after the initial Sidewinder discovery, infrastructure build and successful 4-well drilling program. TAG is now drilling the Sidewinder-A7 step-out with Sidewinder-A8 to follow. Based on drilling results to date, including permit-wide 2D and 3D seismic data, TAG believes that the Sidewinder permit has excellent future exploration potential and plans to pursue opportunities in both the shallow and more importantly the high impact Kapuni Formation prospects.

“We’re happy to be back drilling at Sidewinder,” commented Drew Cadenhead, TAG Oil’s Chief Operating Officer. “We’ve picked up right where we left off with our fifth and sixth successful wells at Sidewinder. Continuing with this year’s 13-well Taranaki drilling campaign, Sidewinder-A7 has now been spudded with Sidewinder-A8 to follow. We have now tied in Sidewinder-A5 and A6 to a flare tank for clean-up, followed by immediate tie-in to the Sidewinder Production Station for ongoing production. These Sidewinder oil and gas discoveries follow on from the original discovery wells drilled in 2010 and 2011, with the Sidewinder-A1, A2, A3 and A4 wells completed as shallow gas wells with associated light oil production. TAG will continue exploration drilling over the coming years within the Sidewinder permit, focusing on both the shallow and deep oil and gas exploration potential.”

Potential for additional discoveries within the Sidewinder permit area.

Sidewinder is a new field discovery situated in the main Taranaki production fairway and is just lightly explored. To date, TAG has been drilling the lowest risk shallow Mt. Messenger (~2000m) prospects in an initial effort to minimize financial risk, build near term reserves and leverage new infrastructure before drilling the high-impact prospects in the Kapuni Formation (~4000m). This prolific formation is where most of New Zealand’s large fields have been discovered and will become a focus for TAG.

“Given the positive results of these recent wells, we continue to be optimistic for further discoveries within the Sidewinder permit area.” TAG CEO, Garth Johnson commented. “We have had excellent success with our shallow Taranaki drilling program thus far and will continue to exploit and develop this important play but our forward drilling strategy will include wells into higher impact opportunities. TAG’s operating cash flow is estimated to grow substantially in April 2013 and combined with approximately $70 million in working capital and no debt, we are in a position to now fund financially riskier opportunities.”

TAG is pleased to have attracted a high calibre executive such as Randy to help build TAG in New Zealand. He has a deep understanding of the industry and has proven himself as a leader. Over the past ten years, Randy was a senior executive with AltaGas Ltd., a leading Canadian energy infrastructure company based in Calgary Alberta. He was originally hired as Operations Manager in 2003 and progressed through to senior executive positions of President, Gas Division and finally as President, Utilities. Prior to AltaGas, Randy has held leadership positions with Williams Energy Canada, Petro-Canada Oil and Gas and with Husky Oil Operations.

TAG has granted a total of 150,000 incentive stock options to Mr. Toone. These options are exercisable until February 26, 2018, at a price of $5.00 per share, subject to certain vesting provisions.

TAG Oil Ltd. ( http://www.tagoil.com/) is a Canadian-based production and exploration company with operations focused exclusively in New Zealand. With 100% ownership over all its core assets, including extensive oil and gas production infrastructure, TAG is enjoying substantial oil and gas production and reserve growth through development of several light oil and gas discoveries. TAG is also actively drilling high-impact exploration prospects identified across more than 2,984,171 net acres of land in New Zealand.

In the East Coast Basin, TAG will explore and potentially develop the major unconventional resource potential believed to exist in the tight oil source-rock formations that are widespread over the Company's acreage. These oil-rich and naturally fractured formations have many similarities to North America's Bakken source-rock formation in the successful Williston Basin.

Statements contained in this news release that are not historical facts are forward-looking statements that involve various risks and uncertainty affecting the business of TAG. Such statements can be generally, but not always, identified by words such as “expects”, “plans”, “anticipates”, “intends”, “estimates”, “forecasts”, “schedules”, “prepares”, “potential” and similar expressions, or that events or conditions “will”, “would”, “may”, “could” or “should” occur.

All estimates and statements that describe the Company's objectives, goals or future plans relating to operations at Sidewinder and generally in the Taranaki Basin are forward-looking statements under applicable securities laws and necessarily involve risks and uncertainties including, without limitation: risks associated with oil and gas exploration, development, exploitation, production, marketing and transportation, undiscovered original oil in place, availability of adequate funding, volatility of commodity prices, imprecision of reserve estimates, environmental risks, competition from other producers, and changes in the regulatory and taxation environment. Actual results may vary materially from the information provided in this release, and there is no representation by TAG that the actual results realized in the future will be the same in whole or in part as those presented herein.

Other factors that could cause actual results to differ from those contained in the forward-looking statements are also set forth in filings that TAG and its independent evaluator have made, including TAG's most recently filed reports in Canada under National Instrument 51-101, which can be found under TAG's SEDAR profile at http://www.sedar.com.

TAG undertakes no obligation, except as otherwise required by law, to update these forward-looking statements in the event that management's beliefs, estimates or opinions, or other factors change.