Stonefly Press, a new fly-fishing industry book publisher, destination travel outfitter, author agency, and photo-sharing host has announced their launch and collaboration with The Orvis Company on their first publication, The Orvis Guide to Fly Fishing for Carp, by author Kirk Deeter. 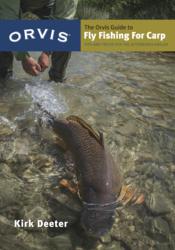 “Debunks the myths and makes a compelling case for the virtues of a misunderstood gamefish, one successfully angling to buck fishing trends in this country and beyond.” – Geoff Mueller, Senior Editor, The Drake magazine

A new entrant into the $800 million fly-fishing industry, Stonefly Press is challenging the traditional focus in this niche publishing field by releasing their first book on fly fishing for carp, a warm water species often regarded with disdain next to the cold water and industry-defining trout. But with an author (Deeter) who serves as editor for the conservation group Trout Unlimited’s TROUT magazine – and in collaboration with The Orvis Company, whose fly fishing focus closely follows the trout fishing industry - Stonefly Press is joining ranks to challenge the heavy focus on trout.

Upcoming publications will cover other warm water and saltwater species, including muskie, northern pike, redfish, and golden dorado, but Stonefly Press is not overlooking the sport’s traditional roots. The second publication, releasing on the heels of the first book, is An Introduction to Fly Fishing for Trout, by Mark D. Williams and W. Chad McPhail, authors of the popular – and trout-centric – Colorado Fly Fishing. More than a dozen innovative new books for fly fishers worldwide are scheduled for 2013 publication, on destinations that include tailwaters, national parks, and the Central American coast.

With a core focus on being part of the fly-fishing community, Stonefly Press will also be working as a celebrity outfitter, cohosting with their authors – including Kirk Deeter, Conway Bowman, Terry & Wendy Gunn, Robert Tomes, Bob Mallard, and others - 2-day destination retreats for small groups of 8-12 interested fly fishing enthusiasts.

Fly shops, fly shows, and fly-fishing clubs can contact Stonefly Press directly to book any of their authors for industry events, streamlining an often arduous process of search and discover. All contracts and arrangements will be handled with a single call, including rates, specialties, promotional photos, and availability of authors.

The Stonefly Press website is also a destination site featuring original blog content from their authors and photographers, a “Grand Slam” social photo-sharing site offering discounts on products and services, and an online storefront offering premium products that range from fly boxes to fly fishing kayaks.

About Stonefly Press
Stonefly Press publishes innovative how-to and where-to fly fishing books, including digital books and featured downloads of destination waters. They focus on creating an experience community shared actively between authors and enthusiasts, and donate a percentage of profits to over a half dozen water conservation groups, including American Rivers, Bonefish & Tarpon Trust, California Trout, Riverkeepers, and Western Rivers Conservancy, among others. http://stoneflypress.com.