Omega3 Innovations Selected As Finalist for Small Business of the Year 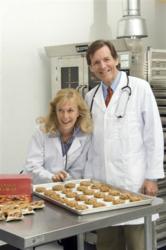 It's exciting to see Omega3 Innovtions has a recognized impact on our community.

This is the third time Omega3 Innovations is in the running for one of the various categories of the Frank G. Berlin, Sr. Business of the Year Awards. In 2010, the Venice-based biotech company was named a finalist for the innovation category for creating an oat-fiber cookie containing as much omega-3 fish oil as a salmon dinner.

Omega3 Innovations still has several steps to go through before the Greater Sarasota Chamber of Commerce names the 2013 Small Business of the Year. Each finalist will participate in a video answering the question, “What makes your business stand out and why should you win the The Small Business of the Year Award.” The winner will be announced at a luncheon at the Hyatt Regency of Sarasota on May 10th.

“We’ll start preparing our answers now," said Dr. Anne-Marie Chalmers, fellow co-founder of Omega3 Innovations with Dr. Martinsen. “To be honored as a finalist for Small Business of the Year puts us one step closer to achieving one of our company's goals -- transforming Sarasota County into the fish oil capitol of the US. Beginning with Sarasota, Omega3 Innovations aims to educate both young and old about the beneficial health effects when consuming the world's freshest fish oil products."

About Omega3 Innovations:
Founded by Bo Martinsen, M.D., and Anne-Marie Chalmers, M.D., – two physicians who have worked with omega-3 fish oil for more than 15 years, the company offers several varieties of Omega Cookies®, as well as Omega Cure® supplements. Each Omega Cookie contains seven capsules worth of omega-3 fish oil, five grams of fiber, 200% of the daily value of vitamin D and 35% of the daily value of calcium. The company was named a winner in the category of innovation at the 2010 annual Economic Development Corporation of Sarasota County’s Hall of Fame awards. The honor came as the result of being the first company to create a bakery product that contains an effective dose of omega-3 fish oil.