Leonard Dimiceli has been voted one of the top 150 worldwide SMB IT channel influencers. 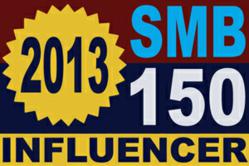 Building Spam Soap has been one of the most rewarding challenges of my life. I'm thankful to my colleagues, partners, and clients for recognizing the success of Spam Soap, along with everyone involved with making it what it is today.

Over the past several months, hundreds of IT professionals from around the world have been engaged in the SMB 150 Channel Influencers contest. The SMB 150, which is a collaboration between SMB Nation and SMB Technology Network, is the SMB technology channel's annual list of its 150 most influential members.

"Building Spam Soap has been one of the most rewarding challenges of my life," Dimiceli said. "I'm thankful to my colleagues, partners, and clients for recognizing the success of Spam Soap, along with everyone involved with making it what it is today."

“In 2012, Spam Soap grew in both adding additional products AND added more Channel Partners. We have and will continue to focus on bringing best in class, relevant and margin rich products to our Channel,” Dimiceli continued. “Last year, we introduced three NEW products that have really taken off in the Spam Soap Channel. The second accomplishment was the addition to the Spam Soap Channel. We attend, Sponsor or speak at 20+ events throughout the year. 100% of our efforts go to participating in Channel events in an effort to gain the confidence, trust and loyalty of the SMB Community.”

Dimiceli and his fellow SMB 150 influencers are invited to attend the SMB 150 Awards Gala on May 4, 2013, during SMB Nation’s Spring Conference at the Microsoft Conference Center in Redmond, WA. The event is hosted by SMB Nation and SMB Technology Network and sponsored by BlackBerry®. Each SMB 150 winner will receive a personalized award plaque, recognition in the SMB Nation magazine and other media outlets, and a new BlackBerry® Z10 device.

"I encourage everyone in the SMB channel community to join with me in recognizing and celebrating the winners of this year’s SMB 150," said Harry Brelsford, Founder and Chairman, SMB Nation. "Each individual whose name appears on this esteemed list has strived to ensure that our SMB community is one that will continue to thrive and succeed. I am beyond excited to toast them at the awards dinner on May 4 in Redmond."

Spam Soap began in 2002 and is a pioneer in MSP community. Spam Soap values their reputation as a knowledgeable, channel friendly, easy to do business with company.

About SMB Nation
SMB Nation is a media integration and events community, targeted at the small and medium business (SMB) channel partner/reseller/consulting/VAR community. SMB Nation spreads the knowledge of SMB technology trends through its conferences, books, print magazine, online services, and worldwide seminars and workshops. As an active participant in the technology community, SMB Nation has a long history of enthusiastic advocacy and evangelism. The SMB Nation tribe exceeds 54,000 followers worldwide. For more information, visit http://www.SMBNation.com, http://www.CloudNation.co and http://www.Telephonation.com.

About SMBTN
The SMB Technology Network (SMBTN) has its roots in partner groups focused on IT solutions & services for the SMB (Small Medium Business) space. Their focus includes Windows platforms including SBS (Small Business Server). In 2005 they combined a series of independent IT Professional groups in Southern California and around the U.S. into a single umbrella group, consolidated as SMBTN. Each group holds monthly meetings to discuss the latest IT business trends. In addition, the group has partnered with Microsoft at various events, further penetrating the SMB space. The SMBTN group continues to expand into new regions, chapters and members across the U.S. For more information, visit http://www.smbtn.org.