The Atlas Society Republishes In-depth Report: "The Persuasion of Nixon: How Objectivists helped to end the military draft"

In the mid-1960s, a handful of individuals from Ayn Rand’s inner circle set out to end the draft. Just how powerful was their influence over Nixon? 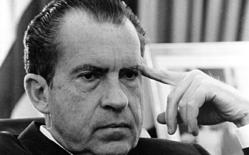 What role did Objectivists play in ending the military draft?

Ayn Rand opposed the draft because it was a statist infringement on the right of the individual to own his own life.

On April 16, 1967, Ayn Rand delivered a speech at the Ford Hall Forum entitled “The Wreckage of the Consensus." This was her first sustained look at the Vietnam War and the draft. Ayn Rand’s position on the draft, like so many of her ideas, was a contrast to both Left and the Right. Rand opposed the draft because it was a statist infringement on the right of the individual to his own life, and because it relied on an ethic of duty and sacrifice. Rand’s philosophical system, Objectivism, which grounded man’s right to life in his faculty of reason and the conditions of his survival, provided a context for consistent, integrated arguments against the draft.

The young intellectuals in Rand’s inner circle—students of Objectivism, at the time—often used the context of her philosophy as the basis of their own activism. And it was now that they began to ask themselves, “What will it take to end the draft?”

Several months after Rand's speech, on November 17, 1967, during a flight out of Washington, a New York Times reporter pressed the Republican presidential nominee on the draft. Nixon had remained ambiguous about the issue up to this point, but the question, his convictions, and his ambition aligned: Nixon stopped mid-non- committal answer, paused, and said “No—I’ll tell you what we’re going to do. We’re going to end the draft.”

In recent years Objectivists, surprisingly, have been described as playing a “pivotal role" in Nixon's decision. Is that an accurate assessment? Researcher and writer Laurie M. Rice examines the evidence and gives the most complete account to date of the anti-draft activism of key Objectivists. The article surveys the role that Objectivist leaders, like Joan Kennedy Taylor and Henry Mark Holzer played, as well as the unique influence wielded by "Persuasion" magazine. In addition Holzer's work as an attorney defending individuals who refused to serve.

Laurie Rice is the research and program assistant for The Atlas Society and the editor of David Kelley’s logic textbook, "The Art of Reasoning." She received degrees in English, philosophy, and psychology

ABOUT THE ATLAS SOCIETY:

"The Persuasion of Nixon: How Objectivists helped to end the military draft" http://www.atlassociety.org/tni/persuasion-nixon