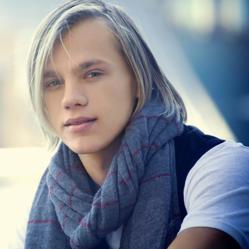 "I don’t know, of course, I appreciate my dancers, but American hip-hoppers are great guys… With them all is simple and sincere…

After exhausting preparation and performance at National Eurovision Selection - 2013, Eduard Romanyuta decided to have some rest and think about his plans for the future. A perfect place for this purpose was California. The singer contemplated the beauty of Los Angeles and was absolutely amazed after visiting Universal Studios Hollywood theme park.

The creative atmosphere of Hollywood inspired Eduard to work even during the holidays. Right there he decided to make a new video for the song "Get Real With My Heart". This is the song the singer so successfully performed at the National Selection for Eurovision - 2013. The hit has already managed to gain popularity in Ukraine, attract attention of European music producers and is now in rotation on all the popular youth radio stations across Europe.

The music video was filmed in the studio "Hollywood World", directed by Christian Ray. The director of the work was Dale S. Lewis and, apart from Eduard, viewers of the video will be able to see in his friend Teresa and a team of American dancers. The setting of this creation is changing from the ocean coast to the streets of Los Angeles. In spite of exhaustion, cold and an intense working schedule, the singer is delighted with the work of his crew. He said about his back up dancers: "I don’t know, of course, I appreciate my dancers, but American hip-hoppers are great guys… With them all is simple and sincere…" The making of the video was quite hard, but also inspiring and the new superstar from Europe promises that the result will impress the audience with a colorful and interesting plot.

The other great news is that Eduard signed a contract for his own VEVO channel, so now the singer will have even more opportunities to show his talent and works to his global audience.

Eduard Romanyuta is a young singer that is gaining more and more popularity and is a laureate of numerous All-Ukrainian and international song contests and festivals. Now the singer is actively asserting himself on Ukrainian and European stages in pop-rock genre. The most recent of his achievements are a 3rd place finish on Ukrainian National Eurovision Selection - 2013, rotation of the song "Get Real With My Heart" on the official Eurovision radio station (as well as other popular radio stations all over Europe) and the award of “The Most Spectacular Video of the Year 2012” according to the music portal NaVse100! To learn more about Eduard Romanyuta and his music, please visit: http://www.Eduardromanyuta.com