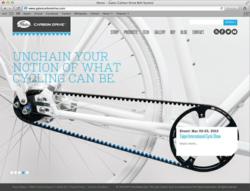 We want to blow up people’s notions of what bicycling can be. The goal is to create buzz and enthusiasm for Carbon Drive as a lifestyle improvement that makes bicycling easier by eliminating some of the grime.

Gates Corporation has launched a new Carbon Drive™ Systems website that highlights the clean, consumer-friendly attributes of the grease-free, chain-replacing belt drive system for bicycles. The site’s goal is to build consumer recognition of Carbon Drive as a high-performance component that simplifies bicycling.

The site, GatesCarbonDrive.com, features images of white belt-driven bikes and cyclists dressed in white, set against white urban backdrops that showcase Carbon Drive’s design. Headlines highlight the key messages: “Cycling Simplified” and “Unchain Your Notion of What Cycling Can Be.”

“We want to blow up people’s notions of what bicycling can be,” said Todd Sellden, director of Gates Carbon Drive Systems. “The goal is to create buzz and enthusiasm for Carbon Drive as a lifestyle improvement that makes bicycling easier by eliminating some of the grime.”

Designed by Denver-based advertising and design firm Cactus, the site makes it easier for consumers to purchase bikes equipped with Carbon Drive belts. Consumers are directed to a new “Buy” page to find bike brands that have models featuring the Gates belt drive. Bike industry representatives and shop mechanics are directed to a page that features installation manuals and videos.

Launched in 2007, Gates Carbon Drive has grown from being featured on five bike models in 2008 to more than 200 today, from more than 80 bicycle brands worldwide. “When we launched six years ago, our first goal was to build confidence in the bike industry that our belts are a viable alternative to chains,” said Sellden. “We have accomplished that mission. Our next benchmark is to grow consumer recognition of Carbon Drive as a component that makes bicycling easier and cleaner.”

About Gates Carbon Drive
Consisting of two lightweight metal sprockets and a high-strength belt embedded with carbon fiber cords, Gates Carbon Drive™ is a low-maintenance, chain-replacing technology from Gates Corporation, the leading seller of automotive and industrial belts worldwide. Clean, quiet, light, and strong, Carbon Drive requires no greasy lube, weighs less than a chain drive, and will not stretch.

Leading bike brands including Trek, Specialized, Raleigh, BMC, Focus, Breezer, and Spot offer a wide range of bicycles with Carbon Drive—commuter, mountain, touring, cyclocross, and city bikes. Carbon Drive is likewise the leading belt drive system for the growing market in electric bicycles, with e-bike models from Smart, Grace, OHM, Bergamont, Mi-Tech, MTB Cycletech, and more. Due to its low maintenance and ease of use, Carbon Drive is a technology that can get more people on bikes. Visit http://www.GatesCarbonDrive.com.