Consuro Managed Technology Named One of 2013 Best Companies to Work for in Texas, Earns Top 10 Rank in Small Companies Category 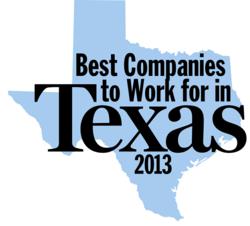 The 2013 Best Companies to Work for in Texas list is made up of 100 companies, divided into three categories based on number of employees, with approximately 33 companies in each category. Consuro is a part of this year’s small business category.

The awards program is a project of Texas Monthly, the Texas Association of Business (TAB), the Texas State Council of the Society for Human Resource Management (TSC-SHRM) and Best Companies Group. The rapidly-growing Consuro is headquartered in Fort Worth with offices in Dallas, San Antonio, Houston, and San Angelo.

“Our company has quickly grown and expanded across the state over the past few years, an achievement made possible only because of our great team,” said Mr. Tiblets. “We strive to be a different kind of IT company, and this award tells us our employees support our mission. We are fortunate to be surrounded by such wonderful people.”

According to the Best Companies organization, this statewide survey and awards program was created in 2006 and was designed to identify, recognize and honor the best places of employment in Texas, benefiting the state's economy, its workforce and businesses.

To be considered for participation, Consuro fulfilled the following eligibility requirements:

The rankings are listed in the May 2013 issue of Texas Monthly, which will be delivered to subscribers and on the newsstand in late April. Texas Monthly is also producing a special publication profiling the winning companies to be released in conjunction with the event.
In addition to this honor, Consuro and its team have received a number of accolades including MSPmentor’s Top 250 People Award; Fort Worth Business Press 40 under 40 honor; and Fort Worth, Texas Magazine’s “Best IT Tech Support.” Consuro was also a finalist for the Fort Worth Chamber of Commerce Vision 20/20 Award.

For more information on the Best Companies to Work for in Texas program, visit http://www.BestCompaniesTX.com or contact Jackie Miller at 877-455-2159.