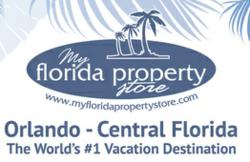 All indicators show a continuing growth for the next few years, in a market that has the world's eyes upon it.

“With the recent 20% price increase year on year, we have now seen Orlando home values reach the halfway point from their peak values in 2007, now with a median value of $133,000 in February 2013 against the peak value of $264,436 in July 2007. Despite the marked increase of 4% from a month ago, this figure details how far the market had dropped since it peak and what tremendous value still exists within Central Florida real estate. All indicators show a continuing growth for the next few years, in a market that has the world's eyes upon it, "says My Florida Property Store CEO Garry Walmsley.

According to the Orlando Regional Realtor Association higher median home prices are largely the result of a record low interest rate of 3.21 percent. Low rates are giving homebuyers a little more “wiggle room” when purchasing. This is blatantly evident in the increase of real estate sales in Orlando. Traditional sales saw a 51.07 percent increase in February 2013 compared to figures from February 2012.

Members of the Orlando Regional Realtor Association closed a reported 2,203 sales in February 2013. This is up 11.54 percent from February 2012. Sales for single family homes, in particular, increased by 16.68 percent. Condo sales decreased by a miniscule 6.69 percent. Buyers are primarily in the market for single family homes for traditional sale. Other types of real estate sales are on the decline. While normal sales saw a 51.07 percent boost, short sales dropped by 24.73 percent and foreclosures sales by 6.69 percent.

Now more than ever is the time to buy in Central Florida. The affordability index for the Orlando region is a favorable 248.38 percent. The report maintains that this affordability index guarantees buyers with the reported median income of $54,929 can qualify for homes listed for $330,346 or less in Seminole and Orange county. While affordability is up, the number of homes available for purchase is on the decline. Buying demand has outgrown the supply. My Florida Property Store boast a wealth of listings to ensure its customers receive the most coveted homes in Central Florida. Visit http://www.myfloridapropertystore.com to start a property search.

About My Florida Property Store:
My Florida Property Store (MFPS) specializes in the representation of foreign national and out-of-state clients in the buying and selling of investment properties, for short-term or long-term rental. MFPS boasts an extensive database of Villa Style Homes, Condos And Town Homes in Central Florida with a focus in Celebration, Davenport, Dr. Phillips, Kissimmee, Reunion, Windermere, the Metro Disney area and Lake Nona – “Medical City” corridor. The MFPS team is fully familiar with local customs in multiple countries around the world which is essential in order to communicate detailed local purchase information in an easily understood, simplified and explainable fashion. My Florida Property Store is a member of the Osceola County Association of REALTORS® and the National Association of REALTORS®.