The Riders 4 Relief Charity Motorcycle Show and Family Day in Coshocton, Ohio along with The Warehouse Steak N Stein and Auer Ace Hardware have officially announced The Riders 4 Relief National Onion Ring Eating Championship Presented by The Warehouse Steak N Stein to be held on Sunday, May 26th where a new National Onion Ring Eating Record will be established. 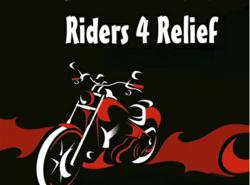 The competitors in this Nationally sanctioned Competitive Eating Championship have heard the onion ring and they will answer the call!

“The Riders 4 Relief Charity Motorcycle Show, Ride and Family Day proves the positive impact that a community can have on those in need.” stated Todd Greenwald, Chairman of All Pro Eating. He continued, “The Riders 4 Relief National Onion Ring Eating Championship Presented by The Warehouse Steak N Stein will crown a new National Onion Ring Eating Champion, it will establish a new All Pro Eating Nationally recognized Onion Ring Eating Record and will forever be known as the event that acknowledged the culinary impact and influence on American history that the Onion Ring should be known for! The competitors in this Nationally sanctioned Competitive Eating Championship have heard the onion ring and they will answer the call! This may be the only time in world history when tears of joy are shed while working with onions! ”

About RIDERS 4 RELIEF: Based out of Historic Roscoe Village in Coshocton, Ohio, Riders 4 Relief was created to improve the quality of life for those in need in Coshocton County. Amy Taylor and Tom Edwards (president of Auer ACE Hardware) formed The Riders 4 Relief Charity Motorcycle Show and Family Day to raise funds to provide assistance with essential needs to those that need it. The Charity Motorcycle Show and Family day is a full day that includes an approximate 75 mile organized motorcycle ride along with a family festival atmosphere, a blood drive, live music and awards. Email riders4relief@hotmail.com for additional details.

About THE WAREHOUSE STEAK N STEIN: What is known as the combination of the Old Warehouse in Historic Roscoe Village and the great food and atmosphere of the Steak n Stein of Zanesville, The Warehouse Steak N Stein creates legendary onion rings, pinwheel steaks and pork tenderloin sandwiches. Additional information can be found at http://warehousesteaknstein.com/

About ALL PRO EATING PROMOTIONS: Founded in 2004, All Pro Eating Promotions is the world’s only recognized Independent Competitive Eating organization and has sanctioned over 180 major Competitive Eating contests and events throughout the world. Each event showcases their “Picnic Style Rules” which were created and developed by All Pro Eating. All Pro Eating Promotions’ “Eatertainers” (event participants) along with their events and contests have been featured in all forms of major world-wide media. More information can be found at http://www.CompetitiveEaters.com