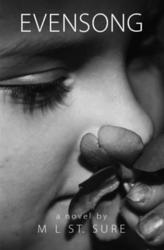 With the Iraq War on everyone's mind, sometimes it's a good idea to look back at the past and try and learn some kind of lesson from it. While it's not the original intention of Iowan author M. L. St. Sure, this is exactly what the new book entitled "EVENSONG" accomplishes.

"EVENSONG" is the story of Christina Cross who grew up on a farm in Missouri and learned how to sing opera from her war-scarred father. When her father dies unexpectedly, her mother throws her out of the house.

Christina is forced to try and find a job to support herself; she begins by being a maid in a hotel, but she is discovered by the owner who harnesses her talent and transforms her into an opera singer.

When Christina finds that her younger sister is being abandoned by her older abusive brother and that her mother is drinking, she decides to take her sister and escape to Europe.

Going to live with her uncle, Philippe Petain the premier of France in Paris, Christina immediately finds herself in the mix of World War II politics. When her uncle surrenders Paris and all of France to Hitler, she is forced to sing for the Nazis.

Recruited by French underground leader Laurent de Gauvion in the resistance, Christina begins to realize what is really going on in the war. She does everything she can to help, from caring for orphaned babies to infiltrating a Kinderkamp in Germany.

Christina's journey makes us realize the costs of war and how they affect everyone, no matter what their role is.

A bittersweet story with a heart wrenching ending, "EVENSONG" is a beautifully written novel. St. Sure transports us into the vivid world of the 1940's exploring everything from the lowest of the low to the highest of the high in the world.

Readers become extremely attached to Christina and her sister Nicolette because St. Sure's characters are carefully crafted; they're vivid, interesting and provide different perspectives about what is going on in the world around them. St. Sure makes sure that readers are privy to their loves, hate, vengeances and motivations.

The plot is fast-paced, taking you everywhere St. Sure needs you to go, while holding back on some of the more gruesome details. This is, after all, a story of one person's encounter with the war, not an overview of the war.

The ending, while extremely sad, is appropriate and did not leave me feeling upset at the author, which is surprisingly unlike how other books have left me when faced with similar endings.

At only 214 pages long, the author still finds a way to fit everything that is needed to create a truly remarkable story. A lot of novels about World War II are extremely long with all the detail, while the shorter stories sometimes feel as if they don't have enough information to make you feel fulfilled.

With short chapters and an interesting topic, this is a good read for anyone of any age or gender. It leaves you attached to the book until the very end. A great read that leaves you thinking about life while you're stuck inside on a cold winter day.

Learn some kind of lesson from it. While it's not the original intention of Iowan author M. L. St. Sure, this is exactly what the new book entitled "EVENSONG" accomplishes.