Inspired by the Title "Olympus Has Fallen", Dylan Luke and Ethan Mark Filmed This Video - They Caught the Attention of Avi Lerner Who Invited Them to the Premier

While most Southern Californians were enjoying the mid-day sun, a concerned young citizen has been alerting the public that Olympus Has Fallen. 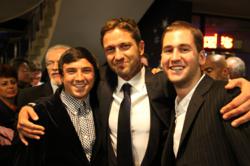 From the screening of Olympus Has Fallen

In the interest of public safety, someone had to keep these kids off the street!