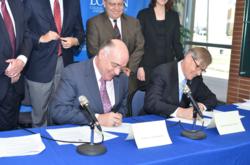 “We will help Logan attract the high quality, well-trained students they expect and this exciting new partnership will offer Westminster the opportunity to attract students who might not have otherwise considered us," said Westminster President Forsythe.

The presidents of Westminster College in Fulton, Mo. and Logan College of Chiropractic/University Programs have signed a 3+3 articulation partnership agreement between the two schools. George B. Forsythe of Westminster and J. Clay McDonald, DC, MBA, JD, of Logan signed the formal agreement at a special event on Logan’s Chesterfield (Mo.) campus on March 19.

Employment of chiropractors is expected to increase by 28 percent over this decade, faster than the average for all occupations. Interest in the field is believed to be high because of the nonsurgical methods of treatment used in chiropractic care.

Since 1935, Logan College of Chiropractic/University Programs has been preparing students to enter the health care marketplace to become successful Doctors of Chiropractic.

Founded in 1851, Westminster College is one of the top liberal arts colleges in America, according to all major educational ranking firms including U.S.News & World Report, Forbes magazine, The Princeton Review and Washington Monthly. This selective college for men and women operates on two campuses, one an 86-acre residential campus in Fulton, Mo., and a second Southwestern urban campus in the vibrant downtown of Mesa, Ariz. Westminster is a challenging academic environment where students are educated to lead and inspired to achieve.