The Samsung Galaxy S4, HTC One Announcements and BlackBerry Z10 Release Spark Growths in Handset Valuations and Trade-Ins Online According to CompareMyMobile.com 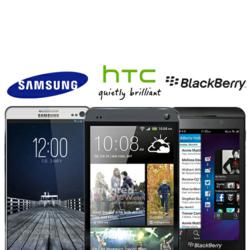 For the first time, CompareMyMobile.com, which pulls in data from over 40+ recycling companies in the UK, has data showing a large increase in consumer trade-ins and valuations for brands other than Apple.

Previous trends in recycling have primarily revolved around Apple releases. The iPhone 5’s release in September 2012 showed a 367 per cent increase in online trade ins and a 40 per cent decrease in the value offered by recycling companies. The decrease is due to the sheer volumes they received and demand of their exit routes in the UK and China.

Apple's decrease in market share is now being reflected in CompareMyMobile’s data, showing that a similar buzz has been generated by the new Android and BlackBerry releases.

Samsung's 23 per cent increase is the smallest figure from CompareMyMobile’s data. However, the handset is not officially released until late April 2013. Early reports show the Samsung Galaxy S4 has received four times the volume of pre-orders compared with the Samsung Galaxy S3. When mapping the initial interest against similar product release trends from Apple, CompareMyMobile predicts the S4 will have the biggest impact on trade-ins out of all the major Q1 and Q2 handset releases.

Consumers loyal to the HTC brand have already started recycling their old HTC phones, causing a 78 per cent increase in online trade-ins on CompareMyMobile for the brand. Consumers are aware that they can place an order and hold the trade in quote for two weeks, avoiding a sudden drop in value. However, an announcement on 21st March suggests there may be a delay in the devices release due to on board camera problems.

The release of the BlackBerry Z10 showed an increase of 62 per cent in BlackBerry branded trade ins. The release caused a drop in the overall BlackBerry trade in prices by 17 per cent. BlackBerry invested a lot of time into the new operating system and Z10 release, trade in data from CompareMyMobile shows it was well received by its loyal fans. BlackBerry recently denied allegations that its OS was rejected for UK government use. Early sales figures are looking good for the company with an unnamed partner ordered 1 million Z10 phones giving a positive increase in the companies value.

Founded in 2009, CompareMyMobile.com is the UK's #1 source for independent mobile phone, tablet, sat nav, laptop, iPad, iPod and games console recycling price comparison. It delivers customers confidence in making the difficult decision of where to recycle their old phone safely and for the most money. CompareMyMobile.com is 100% impartial, comparing prices from more than 40 recycling stores.

Screenshot of CompareMyMobile.comCompare mobile phone recycling and sell gadgets direct through our site for added protection