One Local’s Passion for Cars Leads to National Success 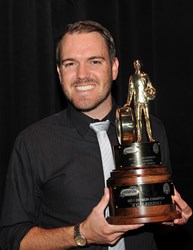 Kyle Rizzoli with his 2011 Championship Trophy. He won the championship for the second year in a row in 2012, and was recently named the official 2012 NHRC Pacific Division Stock Eliminator Champion.

Throughout the year, Rizzoli raced a 1969 Chevrolet Camaro, an old muscle car with some modern modifications owned by David Bridgewater of Devore, CA. By the end of the year, when all points were tallied, he rose to the top of the leaderboard.

Kyle Rizzoli has a passion for cars, whether he’s working on a Toyota Corolla or a muscle car meant for racing. This passion led him to become the 2012 National Hot Rod Association (NHRA) Pacific Division Stock Eliminator Champion for the second year in a row.

Rizzoli, the general manager of Rizzoli’s Automotive, recently won the 2012 NHRA Pacific Division Stock Eliminator Championship. He was honored on Dec. 15, 2012 in Las Vegas for his championship win.

“In the end, it comes down to consistency,” Rizzoli said of his win. “Winning the championship is a hard thing to do. You’re going against roughly 300 racers in the division and 1,000 drivers in the nation. Whoever has the highest point total at the end of the year wins the championship.”

The Pacific Division is the NHRA’s seventh division and consists of roughly 300 racers in California, Arizona, Nevada and Utah. Throughout the year, Rizzoli raced a 1969 Chevrolet Camaro, an old muscle car with some modern modifications owned by David Bridgewater of Devore, CA. By the end of the year, when all points were tallied, he rose to the top of the leaderboard.

Oil practically runs through Rizzoli’s veins. When he was just a boy, Rizzoli began working on cars alongside his dad and grandfather at Rizzoli’s Automotive, a family-owned local auto shop with two Central Coast locations – one in Santa Maria and one in San Luis Obispo, CA. He travels all across the country to compete against other racing enthusiasts.

“There’s a lot of hard work that goes into it,” Kyle Rizzoli explained. “I work on cars all day. Then I go home and work on racecars at night. It’s not easy, but it’s what I love and what I’m passionate about. It requires constant tweaking and adjustments to the car itself, but it also requires a lot of mental preparation With race cars there is no room for error, car and driver preparation has to be perfect.”

Rizzoli has been racing since he was 11, starting in 40 mph junior dragsters. Eventually, he worked his way up to nitromethane-powered dragsters that go 270 mph in 5.2 seconds in just a quarter mile. And unlike other racecar drivers, Rizzoli doesn’t have a whole team of crewmembers helping him out.

Rizzoli’s Automotive has been a family run business for three generations. For more information, call (805) 541-1082 or visit http://www.RizzolisAutomotive.com.