Luxury cigar producer, Venus Tobacco, have unveiled their upcoming line of Venus Goddess Cigars that are hand-rolled on the most unusual of places. 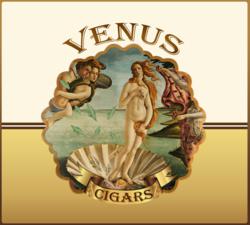 Each cigar contains an international blend of high quality tobaccos, but that's only the beginning of the allure to these ultra luxurious smokes. Every Venus Cigar is hand-rolled on the breasts of young women in Nicaragua, and production of this line will be limited to 1,000 cigars.

Serious cigar enthusiasts will have to pay $100 to get their hands on one of these sexy cigars, but every purchase will come with a video of the cigar being rolled against the breasts of the woman it was created on. If that wasn't enough of a bonus to luxury cigar buyers, each cigar will also come with a calendar of all the Venus girls that helped make Venus Cigars a reality.

The Venus line of cigars will feature a signature torpedo shape, but smokers will have a short wait before they get to set their eyes on one of these cigars. The same goes for seeing the women that participated in the cigar line's production.

Venus Tobacco Representative, Nick Gordon, said "We are very excited to see how smokers will respond to the new Venus cigar line. We've had a positive response from dedicated cigar enthusiasts, but we'll have to wait to see overall consumer response until after our official launch."

Venus Cigars are expected to launch very soon, but aren't available to the public just yet. The company has launched a website at http://www.venustobacco.com for smokers that want to be notified of the product's official release. Visitors can subscribe to a mailing list on the website, and they will receive an email when Venus Cigars goes live to the public.

With the limited production launch of 1,000 pieces, luxury cigar smokers may have to act fast to get their hands on a Venus Goddess cigar. "There's already a big stir within the cigar smokers community. It might be wishful thinking on our part, but we're fairly confident that we'll sell out within a week of our product launch." said Gordon.

While Venus Cigars will have limited supplies during the first launch, cigar smokers could still have future opportunities to buy other Venus cigar lines. According to Mr. Gordon, "If the launch goes as well as we're expecting, we'll definitely create new cigar lines to meet a greater demand by tobacco consumers."

Venus Tobacco have dedicated themselves to providing luxury tobaccos as the first requisite of their cigar production. The company also believes that this alone is not the essence of a truly luxurious cigar. The first Venus Tobacco line of cigars will launch as the Venus Goddess with a price of $100.00 USD. Cigar enthusiasts are encouraged to stay up-to-date about the world premiere of these cigars via the venustobacco.com mailing list.