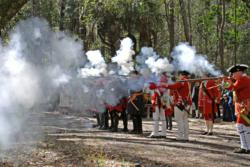 The city's top historic bed and breakfast inn, Presidents’ Quarters Inn, is out to champion the family's mini vacation in Savannah, GA. Perhaps the idea of Savannah as a family friendly vacation spot is one of the genteel city's best kept secrets.

To even the lifelong locals, the child's adventure spots released by Presidents' Quarters Inn may be new news. Spot a lion on main street, alligators and rare fish, big ships, dolphins in the city and in the rivers, and statues that honor the brave. Discover pigs and donkeys residing in the wild. See 'the Castle' downtown and build sand castles on nearby Tybee Island beach. Be right there when songbirds and turtles race out to sea, cannons fire in real forts, and soldiers march with muskets. Meet real life boat captains, artists, and train engineers. Ride diesel and steam engines, a street car, water taxis, and pedicabs. Dine where character-rich pirates partied. Sleep where heroes lived and visited.

"Simple things capture children’s fascination – those things that they do not see or do day-to-day,” says Jane Sales, a lifelong children’s advocate and executive innkeeper at Presidents’ Quarters Inn. Exploring with children stirs their imagination and brings excitement to learning.

Jane relays several scenes from one family’s Savannah vacation. For Georgia Week festivities the family had driven in from Jacksonville, Florida, and stayed at the upscale historic inn.

“After breakfast two young boys (age 11 and 4) and their parents visited Wormsloe Plantation where soldier reenactments brought colonial days in America to life,” she explains. “The boys were excited to be there in the middle of the action at Wormsloe Historic Site.

"Can you imagine the boys’ reaction of being at Old Fort Jackson for the daily musket firings – lock, stock and barrel – and discovering alligators in the moat?" the petite grandmother innkeeper amuses. Fort Jackson was named after U.S. President Andrew Jackson.

More heroes are prominently honored in the city’s garden squares and in Forsyth Park, Savannah’s grand park downtown. See Video: “This is Savannah! The Celebratory Spirit of Savannah.

Simple and casually elegant are bywords at the family owned luxury inn.

“Most children don’t eat fancy food,” the engaging innkeeper clarifies. “Our chef prepares food that is child friendly, like French Toast with fresh strawberries and whipped cream. Or, we’ll prepare something even more familiar, like made-to-order eggs with pancakes, or cheese toast with fruit and milk.” A stop at the newly opened Byrd Cookie Company's downtown store is a nostalgic favorite in the family friendly old City Market.

After breakfast the young family was off to explore the newly opened Pin Point Heritage Museum, a Geechee / Gullah, African heritage museum repurposed from the A. S. Varn oyster and crab factory in Pin Point, a small fishing community just south of Savannah. Pin Point is where first-generation African freed men, women and children never went hungry. They simply went to the river for fish, oysters, crab, and shrimp. Or they would paddle by boat over to Ossabaw Island for a feral hog – hogs that descended from swine released on the island in the 16th century by Spanish explorers. The small community is the childhood home of Supreme Court Justice Clarence Thomas, who participated in opening the museum in November 2011.

It is doubtful that the boys knew that Pin Point and the coastal waters of Moon River (once Back River) were the summer playgrounds where a young and adventurous Johnny Mercer learned the Geechee language from coastal slave descendants.

That same Savannah-born lyricist may have set the tone for a Savannah family outing -- Ac-cen-tchu-ate the Positive! Do we need to say it? In addition to the fun, a few days in Savannah makes for a grand learning trip, too.

P.S. The well-socialized family dog is welcome, too at Presidents' Quarters Inn. The pet-friendly inn’s staff knows the spots in Savannah’s National Landmark Historic District that welcome your family pup. A leash is required.

More information about Presidents' Quarters Inn is available at http://www.presidentsquarters.com, by email at info(at)presidentsquarters(dot)com or by calling (912) 233-1600 or (800) 233-1776, and, with nearly 2,000 followers, the Presidents' Quarters' Inn Facebook page at and Twitter @PQInnSavannahGA more ways to keep up with Savannah events and special promotions offered at the Inn.

Editors – Family visitors to Presidents' Quarters Inn tend to come primarily from the I-95 corridor state of the America's east coast, especially driving in from Florida, South Carolina, North Carolina, Georgia, Virginia, Washington DC, New York. Other arrive by air from other USA locations, as well as United Kingdom, Europe, and Scandinavia. The inn has additional family ideas and recommendations for family-friendly dining spots and attractions. More high resolutions photos are available on request. Approval already received for media to use Georgia State Parks' photos. Link to Fort Pulaski photos download is here.