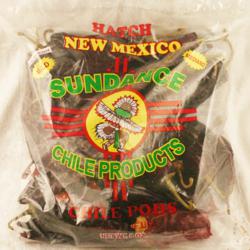 Our red chile is grown right here in Hatch

Young Guns Produce, Inc., one of the country’s largest suppliers of Hatch green chile, has added dried red chile pods to its growing selection of products available through its online store.

“Our red chile is grown right here in Hatch,” Chris Franzoy, President of Young Guns Produce, Inc. says, “so you know it has that authentic Southern New Mexico flavor that people love.”

Red chile is typically left to ripen and dry in the fields while the green chile peppers are harvested. At a certain point the red chile is collected and then dried completely. The red chile pods are used to make the red chile sauces that are a staple of New Mexican cuisine.

“Both are great for making red chile sauce with,” Franzoy adds, “and they are a real part of the southwest.”

Red chile ristras are traditional arrangements of hanging chile peppers originally created to dry bunches of the peppers and then used throughout the year to cook with.

These are decorative, two foot long ristras shipped in a special carton to avoid breakage.

“Our ristras make great gifts,” says Franzoy, “and are something unique that we make here in Southern New Mexico.”