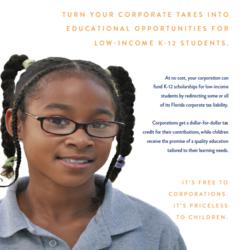 Step Up For Students, a Florida nonprofit that is able to bundle donated corporate tax credits into scholarships for low-income schoolchildren, is eligible to accept $286 million in tax credits for 2013, and to date, over $40 million has been pledged toward the current cap – a 117 percent increase over last year at this same time.

Since the program’s inception in 2002, Step Up For Students, which administers the Florida Tax Credit Scholarship Program, has provided scholarships to more than 271,000 low-income students through the generosity and dedication of the corporate community, including nearly 100 donors in 2012.

At no cost, the Florida Department of Revenue allows corporations to redirect eligible corporate tax liabilities to Step Up For Students, which is serving over 50,000 low-income students in kindergarten through 12th grade this school year. Qualifying students are able to select either a qualified private school or an out-of-district public school that best meets their individual learning needs.

Companies can participate in the program by redirecting one or more of the following tax liabilities in exchange for a dollar-for-dollar tax credit:

In 2012, The Chronicle of Philanthropy ranked Step Up 108th overall among 400 nonprofits that have raised the most money in private support in 2011, and in 2011 was listed No. 3 in terms of growth among the top 10 of the biggest gainers in the last four years. Forbes Magazine also named Step Up For Students as the 57th largest charity in the nation in 2012.

This initiative has proven to be successful both in raising academic achievement levels among students and creating innovative cost savings for Florida. Join your corporate peers in expanding this program so all of Florida's children have the equal opportunity to achieve their maximum potential through an education tailored to their individual needs.

To learn more about how your corporation can provide scholarships to underprivileged children in Florida, contact Debbie Woerner at (866) 344-9553 or visit us at http://www.stepupforstudents.org