The GRC Awards - Seeking the Best in Global Geothermal

The 32nd Annual Award winners will be announced at the GRC Annual Meeting in Las Vegas, Nevada. 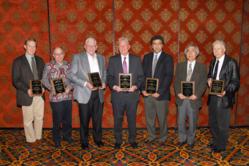 The recipients of these awards often have a lifetime of achievement in the geothermal academic, scientific and commercial communities

The Geothermal Resources Council (GRC) is pleased to announce the opening of nominations for this year’s GRC Awards. The awards recognize distinguished colleagues in the geothermal community from around the world and have been a highlight of the geothermal calendar since the late 1970’s.

The winners will be honored at the GRC Awards Luncheon, the climax to the GRC Annual Meeting being held at the MGM Grand, Las Vegas, Nevada, USA from September 29 –October 2. The theme for this year’s meeting is Geothermal: A Global Resource, from Larderello to Las Vegas.

The Joseph W. Aidlin Award recognizes outstanding contributions to the Geothermal Resources Council and to the development of geothermal resources.

The Geothermal Pioneer Award is given for outstanding achievements in the development of geothermal resources. It recognizes the pioneering efforts of members of the geothermal community who have made lasting contributions to the industry, worldwide.

The Special Achievement Award recognizes special or outstanding achievements in any aspect of geothermal energy development and related areas.

“The recipients of these awards often have a lifetime of achievement in the geothermal academic, scientific and commercial communities”, said GRC interim Executive Director Steve Ponder. “The GRC Awards recognizes the contributions of these individuals to the geothermal sector”.

More information on the GRC Awards, including a nomination form, can be found on the GRC website http://www.geothermal.org. The deadline for nominations is June 28, 2013.

With the experience and dedication of its diverse, international membership bolstering a more than 40-year track record, the Geothermal Resources Council has built a solid reputation as the world’s preeminent geothermal association. The GRC serves as a focal point for continuing professional development for its members through its outreach, information transfer and education services.