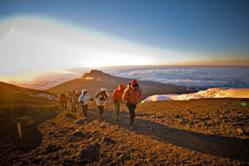 Sunrise near the summit of Mount Kilimanjaro, Tanzania

People want to climb Kilimanjaro and see the glaciers before it is too late.

Ultimate Kilimanjaro, the #1 Kilimanjaro guide service, has added more group climb dates to its 2013 expedition schedule due to growing demand.

Mount Kilimanjaro, located in Tanzania, is the tallest free standing mountain in the world and is the highest mountain in Africa.

“Our early season climbs filled up so quickly,” said Expedition Coordinator Marie Veve. “We had to turn away customers because we just didn’t have the space.”

“We’ve added more group climbs for the rest of 2013 to keep up with our bookings. Right now we have the highest number of scheduled expeditions than we’ve ever had. Inquiries about our 2014 climbs have been steady as well. It’s going to be a busy year,” said Veve.

The popularity of climbing Kilimanjaro is now at an all-time high. Based on Tanzania National Park statistics, in the past ten years the number of climbers on the mountain has nearly doubled - from 28,000 tourists in 2003 to 52,000 tourists in 2012. It’s a far cry from the Kilimanjaro’s early tourism days, when there were barely a thousand visitors back in 1965.

The increase in tourism to Mount Kilimanjaro can be attributed to a few main reasons. First, there has been tremendous growth in the travel industry, particularly adventure travel, as a whole. More and more people are seeking to spend their vacation time doing outdoor activities and are travelling outside of their own country.

Second, Mount Kilimanjaro has been the adventure of choice for various high profile events. In 2009 and 2010, BBC and MTV filmed and televised separate Kilimanjaro charity climbs by United Kingdom and American celebrities, resulting in tremendously successful fundraising and widespread interest in the mountain itself.

The thrill of the mountain does not seem to be letting up. Last year, there was an attempt to launch a hundred paragliders from the summit. And this year, there is a group planning on mountain biking down Kilimanjaro. The publicity of the events keeps the peak in the public’s eye and will continue to draw tourists.

Lastly, it is well known that the days are numbered for the iconic glaciers on the mountain. Mount Kilimanjaro has three main ice fields. Scientists predict that the ice on the western slope will be gone by 2020 and the two glaciers near the summit will be gone by 2040.

“First-hand accounts from our guides indicate that the volume of ice is visibly shrinking every season. People want to climb Kilimanjaro and see the glaciers before it is too late,” said Veve.

Mount Kilimanjaro can be climbed in as little as five days, but seven or more days is highly recommended for proper acclimatization to the high altitude. Kilimanjaro climb prices range from $1,915 to $2,155 for the group climbs on seven and eight day routes, including hotel accommodations pre- and post-trip.