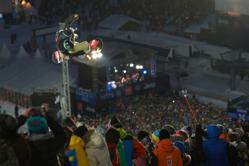 Iouri “I-Pod” Podladtchikov has made history by landing the first ever cab double cork 1440 in Men’s Snowboard SuperPipe at X Games Tignes 2013.

I-Pod has only attempted the trick three times ever, never once landing it until tonight. He learned it on Monster Energy’s training airbag in Mammoth, Calif. before finally committing himself to it tonight in Tignes.

He attempted the trick on his second run and sketched out, but nailed it on his final run. After pulling a frontside tail 900, backside 900 mute grab, and frontside 1080 tail grab, he not only landed but absolutely stomped the Cab double 14. He rode away clean and wiped out on his final hit, giving him a 4th place finish.

Upon reaching the bottom of the pipe he was so stoked he hucked his helmet, goggles, and finally his board into the screaming crowd.

Check it all out here: http://tiny.cc/x8jbuw

Visit http://www.monsterenergy.com and http://facebook.com/monsterenergy for all the action from X Games Tignes 2013, including exclusive photos, videos, and contest results as they happen.