The official mass to inaugurate Pope Francis as the bishop of Rome — and leader of the world’s 1.2 billion Roman Catholics — will take place on Tuesday, and also explains to Journalists and a Peculiar Magazine correspondent how he got the name Francis. 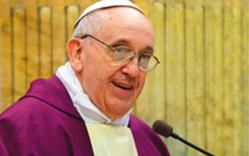 The official mass to inaugurate Pope Francis as the bishop of Rome — and leader of the world’s 1.2 billion Roman Catholics — will take place on Tuesday, Peculiar Magazine Gathered from CNN

The new pontiff gave his Angelus, or noon blessing, from the papal apartment window, speaking to more than 200,000 worshipers in the square four days after his election as pope.

“Dear brothers and sisters, good morning,” he said in Italian, drawing cheers from the crowd.

During the 15-minute address, he focused on forgiveness.

“Never forget this: The Lord never tires of forgiving us,” he said.

“Have you thought about the patience that God has with each of us?”

He made the historic address after celebrating Mass at Sant’Anna parish in Vatican City earlier Sunday.

In a rare move for a pope, Francis spontaneously walked out from Vatican territory to greet cheering well-wishers outside Sant’Anna Gate.

“Dear friends, I thank you from my heart and I ask you to continue to pray for me. Pope Francis.”

In his first week as pontiff, Francis has enjoyed global fanfare as the first Latin American pope and the first Jesuit pope in modern times.

The new pope explained his choice of the name Francis in a meeting with journalists in which a Peculiar Magazine correspondent attended on Saturday, and discussed how he wished for a church that was both poor and “for the poor.”

Francis, who before he became pope was Cardinal Jorge Bergoglio, said a fellow cardinal from Brazil had told him “Don’t forget the poor” as the votes stacked up in his favour.

“Right away, with regard to the poor, I thought of St. Francis of Assisi, then I thought of war,” he told the assembled journalists.

“Francis loved peace and that is how the name came to me.”