MapsofWorld launches an infographic poll about Muslim Nations and democracy. 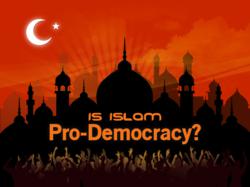 The infographic explains the relationship between Shari’a, the Islamic law and democratic freedoms valued highly in most of the western countries.

As part of their ongoing FryDay Poll series, MapsofWorld.com have launched a new infographic poll – Is Islam Pro-Democracy?

In their comprehensive infographic about Muslim-majority nations and democracy, MapsofWorld has put together a fact-packed infographic. Drawing on their core expertise, maps and research-based content, the portal has chosen to showcase yet another debate of global stature. Since the earliest stirrings of the Arab Spring the world has been discussing the subtle relationship between Islamic nations, nations with Islam as a state religion, and other Muslim-majority countries and the need for democracy as a form of government. Apart from the consequences of the Arab Spring, the infographic also touches upon the results of various polls conducted in Muslim-majority countries with regard to what the people really want.

The infographic explains the relationship between Shari’a, the Islamic law and democratic freedoms valued highly in most of the western countries. It acts as a great research tool by including a map of the Muslim-majority countries according to the Democracy Index and also popular perceptions.

Mapsofworld.com is one of the world’s largest mapping and content portals and has been an important research aid since 2003. The site has over 25 million map downloads to its credit and has drawn over 66 million visitors till date. Since 2011, MapsofWorld has introduced a series of infographics about topics of global or social concern.

MapsofWorld.com is a multilingual portal offering high-quality maps and information across geographies and platforms. With special focus on educational content, the portal has thematic as well as interactive maps on all major platforms: Web, iPhone, iPad, iPod, and Android. World Atlas and World Quiz are two highly successful educational apps have been downloaded. Other services offered are custom mapping, content digitization, and the online map store.