Burt Reynolds will return to the venue in Stuart on March 25 and 26, 2013, for an intimate and heartfelt show. 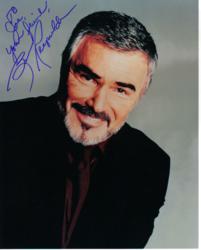 “An Evening with Burt Reynolds: Part Deux” will attract audiences from near and far to the small but mighty stage at The Lyric Theatre in downtown Stuart, where the movie idol will deliver back-to-back performances March 25 and 26.

The one-man show will feature Reynolds, 77, speaking from the heart about his immensely successful career and offering up hilarious back stories, touching memories and matter-of-fact experiences as a superstar and a sex symbol.

While Reynolds is a native of Lansing, Mich., he has been associated with South Florida since childhood and graduated from Palm Beach High School. For more than three decades, he lived on a 160-acre piece of property in Jupiter. While in Jupiter, he opened the famed Burt Reynolds Dinner Theater, which is around the corner from the headquarters of Waterfront Properties and Club Communities, off A1A.

The Burt Reynolds & Friends Museum was housed in an old bank building under the Indiantown Road bridge for years before it was relocated to the village of Tequesta in order to make way for a commercial development on Intracoastal Waterway real estate for sale.

“An Evening with Burt Reynolds” will include photo opportunities with the mustachioed icon, a montage of his body of work, which includes such hits as “Smokey and the Bandit, “The Longest Yard” and Boogie Nights,” and behind-the-scenes information from a career that has spanned more than 50 years.

Today, Reynolds brings his five-plus decades of experience not only to the stage in Stuart, but also to the Burt Reynolds Institute for Film & Theatre, where he regularly teaches master-acting classes to aspiring stars of the silver screen. His classes always are well-attended and well-appreciated by students, who lovingly refer to their instructor as “Boss.”