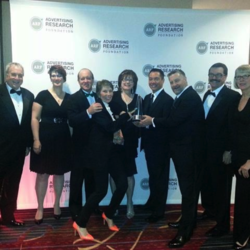 The collaboration among the research, creative and the brand marketing teams has been second to none.

Advertising Savants, Inc., a strategic marketing agency based in St. Louis, Missouri, won a 2013 Ogilvy Gold Award in the Health and Personal Care category for the “Good Health Starts Here” advertising campaign it developed for Delta Dental of Missouri. The awards ceremony took place Tuesday night, March 19th, at the Marriott Marquis Hotel in New York, NY. The Ogilvy Awards for Excellence in Advertising Research annually honor extraordinary and/or creative use of research in the advertising development process to create powerful, profitable campaigns.

The "Good Health Starts Here" campaign was built around the research finding that the link between good oral health and good overall health was a powerful idea but not well understood by the public—despite mounting evidence that cues to possible, serious, physical illness could be uncovered during dental examinations.

The multi-platform campaign features two :30 and four :10 TV spots: one :60 radio spot, trade advertisements, a campaign microsite, plus a series of PSA’s and a social media initiative. The centerpiece of the campaign is a green toothbrush; a symbol for the trust consumers’ place in Delta Dental of Missouri for their dental insurance. The :30 television spots, entitled “Track” and “Fence,” feature slice-of-life vignettes of people with green toothbrushes in-hand; a metaphor for the role good oral health plays in good overall health. The campaign is running throughout the state of Missouri.

Advertising Savants, Inc., based in St. Louis, Missouri, was founded in 1991 by Kevin Reardon. Since its inception, the agency has built a roster of clients in consumer products and services, including household goods, healthcare and financial services. Advertising Savants has received national and international recognition for its creative work. The Ogilvy Gold Award caps off a string of awards for the agency in the past six months, including an Emmy Award for the best television creative concept for its Saint Louis University Cancer Center spots and the 2012 Brass Ring Award, the top creative award by the International Association of Amusement Awards and Attractions (IAPPA) for its television creative work for the Saint Louis Zoo.

Delta Dental is the leading dental benefits provider in the nation. For over 50 years, the organization has been providing access to quality care, comprehensive benefits, oral health information and excellent service. Delta Dental of Missouri offers dental and vision benefits in the states of Missouri and South Carolina, providing coverage to more 1.4 million members through 1800 companies.