Andre Barbieri, of Santa Barbara, has worked with prosthetists at Loma Linda University Medical Center East Campus to develop a biking leg and a running leg that allow him to train and compete in paratriathlon events. 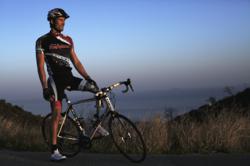 A member of the Loma Linda University Team PossAbilities is the only physically-challenged athlete expected to compete in “Kendra’s Race,” the UC Santa Barbara Triathlon, set for March 30.

Andre Barbieri, of Santa Barbara, has worked with prosthetists at Loma Linda University Medical Center East Campus to develop a biking leg and a running leg that allow him to train and compete in paratriathlon events. Barbieri lost his left leg following a snowboarding accident in 2011.

He is a member of the Team PossAbilities “Road to Rio” program, which seeks to field a team of physically-challenged athletes to the Paralympics in Rio de Janeiro in 2016.

“This will actually be my first full triathlon, of which I'm pretty excited and also a bit scared. The running part is still a ‘monster’ for me, but I'm getting better every time,” says Barbieri.

“It's important because this is my adopted town, it's a great challenge, and I swam and cycled this same event last year. I ‘killed’ on the ocean swim but not so great at cycling because I still had my regular leg. Let's see how I do with a specific cycling leg! It's important to say I'm the only challenged athlete that does this event. PossAbilities was well represented then and I'm going to represent it again.”

“Kendra’s Race” is the triathlon held at the UC Santa Barbara campus. The race is named after Kendra Chiota Payne, a former student who was killed in an accident while training.

PossAbilities is a community outreach program developed by Loma Linda University Center East Campus and supported by founding partner, the San Manuel Band of Mission Indians. PossAbilities’ goal is to offer physically-challenged people born with or have permanent physical injury a sense of community by offering activities and practical help.