The Heirloom Market & Café makes two big announcements this week by announcing extended hours for Monday through Saturday and the changing of three of their recently added craft beers. 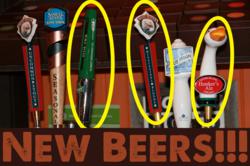 We had a lot of customers ask us for a ‘normal’ beer. Our approach to beer is to bring in only craft beer. That being said, we will not be bringing in anything like a Bud Light, but we feel like we found an excellent, light craft beer called, ‘Mississ...

The Heirloom Market & Café is expanding their hours and their pallet for craft beers. With the winter months gone, the Heirloom Market & Café is now expanding their hours so that they will be able to stay open later and allow for people to stop in to enjoy breakfast, lunch, and now dinner every Monday through Saturday. This is a move that owner, Bill Heid is very excited about.

“The goal behind our beer program is to not just offer beer, but offer an education in the enormous variety of really good beer that is available today. We want people to have access to beer that we would consider higher quality that your standard domestics that people are used to. Out of the six craft beers that we have on tap, three of them will rotate every two to three weeks to new varieties and new breweries. I think part of the appeal of what we are trying to accomplish is to offer a beer selection that is never the same from month to month - it will change with the seasons. This is the primary reason why we are now doing the Heirloom Flight Sampler so that you can come in and try four different beers at one sitting,” said Matt Heid, manager of the Heirloom Café.

“We had a lot of customers ask us for a ‘normal’ beer. Our approach to beer is to bring in only craft beer. That being said, we will not be bringing in anything like a Bud Light, but we feel like we found an excellent, light craft beer called, ‘Mississippi Blonde,’ from Bent River Brewery in Moline, IL. This is a refreshing light-bodied pale ale,” says Heid.

In addition to the Bent River Mississippi Blonde, they are also adding Summit Old 152 which is a beer recipe from Summit that is based on pre-prohibition ingredients. They are also bringing in Goose Island’s Honkers Ale to replace the Goose Island 312.

According to Bill Heid, owner of the Heirloom Market & Café, they feel as though they will be able to give their customers a more dynamic dining experience at night now that that they are able to serve beer and wine. He went on to say that they are really looking forward to the upcoming spring and summer months when there is typically an increase in traffic along highway 84.

For more information on the Heirloom Market & Café and for up-to-date information regarding their menu and upcoming events, check out their website at http://www.TheHeirloomMarket.com.