Deep Rich Data utilizes the interlinked nature of social media to create a strong marketing presence. Evidence of these results are found on various social media networks across the internet, but Barter Rewards shows us proof. 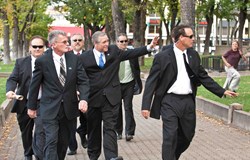 Today it is a new market with new tools, but Deep Rich Data is classic marketing, basic promotion, and hard work, it pays off in promo biz, even on the internet.

Barter Rewards, an Orlando based barter exchange company; hit it big again this week with an amusing YouTube video, “21st Century Trade Exchange,” featuring a great George W. Bush impersonation by John C. Morgan. The video had received almost no attention in 3 months until Tate Carson, founder of Barter Rewards, asked for DRD or Deep Rich Data to be applied.

“We were told that this DRD would help our promotions, but from 311 views to almost 300,000 was way beyond expectations.” Carson revealed, “Our other social media outlets jumped up in followers as well as a good increase in visits to our website.”

BizCentral USA, a national business services company based in Orlando, has been contracted to do Barter Rewards promotions for some time and is a customer of Barter Rewards as well.

Marketing Director Thomas R. Reich developed the basics of Deep Rich Data back in the 1990s. “I was promoting music back then for major groups like Yes and INXS for Warner Atlantic and others. However, I had independent clients too like 2 Live Crew and D. J. Magic Mike,” Reich explained. “To get smaller independent artists exposure and charting, we needed taste makers, free goods and street promotion; DRD is based on the same assumptions.”

“We have seen a noticeable rise in barter sign ups here at Barter Rewards since Tom Reich and BizCentral USA began promotion through our social media and YouTube,” Carson added.

“Deep Rich Data will continue to evolve, but I see a great start here, it works,” Dr. Reich stated. “It is a new market with new tools, but classic marketing, basic promotion, and hard work pays off in promo biz, even on the internet.”