http://www.Shoe-Manufacturer.com spokesperson, Winnie Peng, announced today the launch of their New Footwear Designers’ Education Initiative, a program designed to educate and encourage new shoe designers who want to start their own footwear brand. 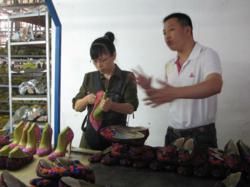 There are a lot of amazingly creative and talented footwear designers who have never actually had the opportunity to see their pen-and-paper designs turned into reality, and we want to help make that happen.

Winnie Peng (pronounced ‘Puhng’) of http://www.Shoe-Manufacturer.com is on a mission to unlock the hidden shoe-designer talent around the world with a new initiative to educate would-be footwear designers through a video series to teach them how they can turn their sketchbook drawings into actual footwear and to launch the designer’s own brand.

“So much of the footwear you see, even at the shoe shows, is mostly just ‘the same old thing’”, says Peng, “yet there are a lot of amazingly creative and talented footwear designers who have never actually had the opportunity to see their pen-and-paper designs turned into reality, and we want to help make that happen.”

Peng believes this can be done by educating these new designers as to the two most important factors in success for launching a new footwear brand, first, in having a realistic idea for the actual cost of producing shoes and importing them from the shoe factory and, second, in having a good marketing plan in place to sell the new shoes, once they've arrived.

“Emails arrive almost daily from people who love designing shoes saying, ‘I’m starting a new shoe brand, can you make my shoes?’, but, unfortunately, many of them have no idea of the actual costs involved.

“Many shoe designers have the mistaken idea that ‘everything's cheap in China’ and don’t realize that it takes hundreds of dollars just to create a prototype when considering the time needed by the in-house design team to discuss and formulate the actual component plans for the shoe, the purchasing manager’s time to search and secure the correct materials from the market, the skilled craftsmen to actually build the prototype shoe, the accounting and shipping departments for logistical work and the project manager’s time in corresponding with the new designer (often dozens of hours over many days)… not to mention the raw materials themselves.

“Beyond making a prototype of original design, many new designers have no idea of the cost for the full-production order, the fact that usually costs at least $10,000 to produce even a minimum quantity of shoes from the shoe factory, along with shipping and customs."

"But the most important factor in success", according to Peng, "is Marketing. Without good marketing, creating the greatest design and coming up with the cash to produce and import the shoes could just be wasted, and the talented designer then becomes too discouraged to continue.”

“Fortunately,” she goes on to say, “because of the power of today’s Internet and especially Social Media Marketing such as Google+, Facebook, Pinterest, YouTube and Twitter, it has never been easier or cheaper for a new footwear designer to get their shoe creations seen and bought by the shoe-buying consumer.”

Peng believes that if the creative power of all the talented shoe designers, currently hidden in the background, were to actually hit the shoe market, their new and creative designs might just revolutionize the footwear fashion industry. She hopes the new series of training videos now being produced will help to educate and inspire a new generation of footwear designers to great success.

About:
Lexis Global Marketing LLC (LGM), http://www.LexisGlobalMarketing.com, works with client companies to develop and implement their marketing programs and strategies, domestically and internationally,