Marriage Infidelity is Not the Biggest Problem in a Troubled Marriage, Marriage Expert Says

According to Marriage Expert Hellen Chen at a marriage workshop held in Los Angeles, infidelity does not cause as much problem in marriage than one thinks. Most couples having a hard time in their marriage has communication as their biggest problems. 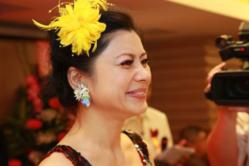 Hellen Chen, the maverick matchmaker who would spare no effort to see couples happily married.

Most married couples do take their marriage vows seriously. But the problem lies in not preparing oneself for what might happen in a marriage.

In a seminar held last month in Los Angeles, marriage expert and media favorite Hellen Chen lectured to singles and couples of how common marital problems get created from communication failures in the relationship, despite the best intentions of a couple.

According to the website InfidelityFacts.com, statistics have shown on that up to 41 percentage of marriages have one or both spouses admit to infidelity, whether physical or emotional.

There are even websites created only for married men and women to find dates outside their marriages ( it is called married dating). It is not an "uncommon practice" according these websites.

But all these problems are simply "after-the-fact" according to Chen, who is also a matchmaker who has helped more than 100 men and women to find their perfect matches and stay married.

Unlike traditional matchmaker, this unorthodox matchmaker deals frequently with men and women who have had their hearts broken and who have huge skepticism about marriage itself.

"Before infidelity happens, the communication between a couple is already in trouble." said Chen, in an interview from Los Angeles, CA.

Recently, during a vacation in Helsinki, Finland, Chen was asked by a local press Helsinki Times reporter, "How could you help the men and women in Helsinki to have a better relationship? Finland has one of the highest divorce rates in Europe."

Chen's answer is "Men and women are not educated about marriage. We know how to make money and to do well in our career but we still do not quite know how to get along with another person. Couples need to be educated on how to maintain a lasting happy relationship" said Chen.

According to Chen, issues like infidelity or finance quarrels are not the basic problem. The basic problem lies in not having open and honest communication between couples and even when rough spots did occur, not knowing how to patch up the situation through communication.

"Most married couples do take their marriage vows seriously and they do want to make it through." said Chen. "But the problem lies in not improving one's communication skills. For example, guys do not learn how to talk to their wives correctly. Or a woman adopting the speaking style of a nagging mother-figure."

Chen's latest book "the Matchmaker of the Century" has become the number one bestselling relationship book on Barnes and Noble as the book shared real stories of couples who overcame challenges in their relationships with the help of the matchmaker.

The ardent matchmaking has held workshops from Asia to America to help singles and couples understand how to cope with the various issues of marriage - from finding a perfect match to improving communication. Her next relationship workshop will be held in Los Angeles, CA on May 4th 2013.