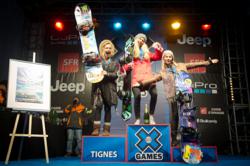 Norendal lead from the beginning, and on her second run managed to improve on her first score and lengthen her lead.

Monster Energy teammates Silje Norendal and Jamie Anderson have taken the gold and silver in an exciting Women’s Snowboard Slopestyle event at X Games Tignes 2013. The duo took the top spots on their first runs and battled from there, with Norendal prevailing to earn her first career gold.

The competition was really stiff in today’s final—many were calling it the most progressive final event ever in women’s slopestyle competition. The entire field went huge and pulled really technical tricks as they fought for a coveted podium spot.

Norendal lead from the beginning, and on her second run managed to improve on her first score and lengthen her lead. Up top on the rails she showed tech prowess, including a smooth switch 50-50 to frontside boardslide. She went on the nail a switch backside 540, a frontside rodeo 540, and a Cab 720, a trick she just learned just this week. Her score of 93.00 proved unbeatable.

Anderson looked solid as well with a run that included a stomped switch back 540, earning a score of 85.66. It’s an incredible eight medals in slopestyle for the 22-year-old Anderson, a huge achievement.

Check out http://www.monsterenergy.com and http://facebook.com/monsterenergy for more from X Games Tignes 2013, including exclusive photos, videos, and contest results.