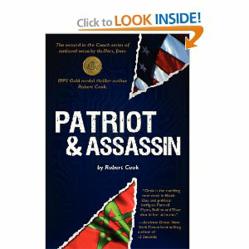 During the past 400 years as the Christian world has enjoyed accelerated success, there are some powerful lessons in education for the middle east, that all become vivid in this novel of thrills, violence and surprise.

Gold medal thriller author Robert Cook and Royal Wulff Publishing today announced a five-day no-charge promotion of his newest successful novel, Patriot & Assassin. Embedded within the storyline are interpretations that provide key, thought-provoking lessons regarding the divergence of Christian and Muslim thought that began centuries ago. Beginning March 27 through March 31, 2013, readers will be able to download the Kindle edition of Patriot & Assassin on a complimentary basis. Download complimentary Patriot & Assassin March 27-31.

Concurrently, Cook’s original Gold Medal winning novel of the Cooch series of national security thrillers, “Cooch,” will also be offered as an Amazon Kindle edition priced at a discounted $2.99.

“Christians should find a way to look at the Middle East as a long-term opportunity for unity, rather than just as a short-term problem, particularly as this time of year. Our ways of life after all, diverged only 1500 years ago with the birth of Mohammed. Specifically, during the past 400 years as the Christian world has enjoyed accelerated success, there are some powerful lessons in education for the middle east, that all become vivid in this novel of thrills, violence and surprise,” said author Robert Cook.

Offered from Royal Wulff Publishing and Robert Cook Novels (http://www.robertcooknovels.com), the novel features protagonist Alex ‘Cooch’ Cuchulain who has emerged as one of the most unusual killers, with a bent towards both Wall Street and special ops warfare in this national security thriller.

Cook develops Alex Cuchulain both as a Muslim executive who uses both his knowledge of Islam and his Irish-American heritage to begin to bring a better life to the masses of the Middle East, using the lessons of the Enlightenment. Earlier in his life, Cooch was a CIA-sponsored special-ops warrior. Al-Qaeda terrorists now plan to attack in the USA, with plans to kill tens of thousands of Americans in a single, cruel blow. Cooch and his team are sent to crimp their plans. His allies include a Rhodes Scholar former Seal, a former Marine sniper and a foul-mouthed, scary smart, female physicist who has developed the world’s most sophisticated intelligence system.

The protagonist is a violent killer with a unique set of learned qualities. His father is a wheelchair-bound former Marine and Medal of Honor winner who gives his son advice as to how to survive in a violent world. His mother is the daughter of a Bedouin sheikh who sent her young son off during many of his summer breaks to experience and learn the Bedouin life. The combination of a very young start in learning the art and craft of violence, combined with a thirst for knowledge drives him to become both a noted designer and user of explosives, an effective executive based in Tangier and an expert in Islamic affairs.

Mr. Cook is an active philanthropist. He endowed the Robert E. Cook Honors College of Indiana University of Pennsylvania that was recently covered in Donald Asher's book, "Cool Colleges for the Hyper Intelligent, Late Blooming and Just Plain Different." http://www.iup.edu/honors. He is currently active in its support, particularly for Achievement Funds used for assistance in study abroad and supporting low-paying, but valuable, internships.

Cook was named the Ernst and Young Entrepreneur of the Year for the Metropolitan Washington, DC Region in 1987.

Originally of Altoona, Pennsylvania, Cook holds a BS in Mathematics from Indiana University of Pennsylvania and an MBA from the George Washington University.