The growing popularity of ebooks and Amazon's Kindle Direct Publishing program has meant unprecedented success for many independent authors. One recent example is Mainak Dhar, who overtook Stephen King as the #1 Horror author on the Amazon Kindle store last week. 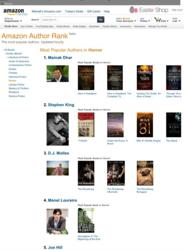 #1 on the Most Popular charts on Amazon.com among Horror authors

A revolution has been brewing in the publishing industry, driven by the growing popularity of ebooks and Amazon's Kindle Direct Publishing program, which lets independent authors reach out to readers worldwide. Many authors have used this over the last two years to strike gold on Amazon, often eschewing traditional publishers. Recent estimates say that as many as four out of ten bestselling Amazon ebook titles have been published through this groundbreaking program.

A recent example is that of Indian author Mainak Dhar, who currently lives in Singapore. Dhar had been widely published in India by major publishers, and one of his novels (Herogiri) is being made into a Bollywood movie. In late 2011, he started using Amazon KDP to reach out to a worldwide audience through ebooks, and the success he has seen reached a peak last week when he unseated Stephen King as the #1 Most Popular Horror author on Amazon's Kindle store. That heady feeling lasted much of the day before Dhar slipped back to #2. Says Dhar, "Mr. King has been an inspiration, and just being on the same page as him is an honor". Dhar's most popular work has been the Alice in Deadland series, an adventure set in a dystopian future world. He has already self-published four books in the series on Amazon and is currently working on the fifth.

Amazon's KDP not just gives authors a worldwide reach, but also means significantly higher royalties- up to 70% on ebooks priced above $2.99, compared to 7.5-10% on traditional paperback deals. Dhar has sold an estimated 150,000 ebooks on Amazon and says that, "Embracing technology and the revolution of ebooks and digital marketing has been a game changer for me in terms of connecting with readers worldwide.'