Kelly Brush Davisson, who rebounded from tragedy to start a foundation for adaptive athletes and to improve ski racing safety, will be featured during the NCAA men's basketball Final Four on CBS. 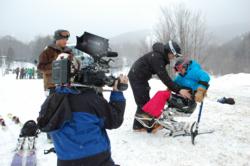 Kelly Brush Davisson gets ready to ski at Sugarbush Resort, Warren, Vt., on 2-23-13. Brush Davisson will be featured in a Human Highlight Reel on CBS that is scheduled to air at 3:30 p.m. on April 6.

After my spinal cord injury, working to make ski racing safer seemed like the right thing to do, and, as an athlete, it likewise seemed natural to get back to the sports I love and to do the same for others with spinal cord injuries.

When millions of fans are riveted to the NCAA Final Four basketball games, viewers will also catch the remarkable story of a Vermont ski racer who rebounded from tragedy to start a foundation for paralyzed athletes.

The story of Kelly Brush Davisson and the Kelly Brush Foundation, which she started after becoming paralyzed in a ski racing crash, will be featured on CBS during the NCAA Div. 1 men's basketball finals. The segment is scheduled to air at 3:30 p.m. on April 6. Brush Davisson, 26, who grew up in Charlotte, Vt. is one of six former NCAA athletes to be profiled as part of the NCAA/Buick Human Highlight Reel during the finals.

“After my spinal cord injury, working to make ski racing safer seemed like the right thing to do, and, as an athlete, it likewise seemed natural to get back to the sports I love and to do the same for others with spinal cord injuries. I'm honored that we were selected to tell our story during the Final Four. This is a terrific opportunity to deliver our message on a national stage,” Brush Davisson said.

A crew filmed the segment at Sugarbush Resort, Warren, Vt., in late February, where Brush Davisson trained and raced as a high school student at Green Mountain Valley School. The Kelly Brush Foundation has supported nonprofit ski racing clubs throughout the country by giving grants for netting and other equipment to increase safety and prevent injury.

Brush Davisson, together with her family, founded the Kelly Brush Foundation in 2006, following a ski racing crash that left her paralyzed. Despite her injury she remained active in sports, winning the women’s handcycle division of the Boston Marathon in 2011.

In the six years since its inception, the foundation has raised over $1 million to support the foundation’s two-pronged mission to improve the quality of life for those living with spinal cord injury through helping athletes purchase adaptive gear and to improve ski racing safety by assisting race programs across the country in procuring safety equipment, such as netting to line courses.

The Kelly Brush Century Ride powered by VBT Bicycling and Walking Vacations is the foundation’s primary fundraiser. The 100-mile ride starts in Middlebury, Vt. and draws over 700 riders. This year's ride is scheduled for September 7.

About the foundation: The Kelly Brush Foundation is a nonprofit organization dedicated to improving ski racing safety, enhancing the quality of life for those with spinal cord injury(SCI) through providing adaptive sports equipment, advancing scientific research on SCI and supporting the U.S. Adaptive Ski Team. The foundation has raised over $1 million and assisted in procuring over 400 miles of safety netting and other safety equipment for ski racing organizations as well as launched a successful public awareness campaign about ski racing safety. The foundation has also purchased over sixty pieces of adaptive equipment for paralyzed individuals, getting them back into the sports they love. Kelly Brush Davisson, together with her family, started the foundation in 2006 after she sustained a severe spinal cord injury while racing in NCAA Div. 1 competition as a member of the Middlebury College Ski Team in Vermont. The Kelly Brush Foundation affirms Kelly’s ongoing commitment to live life on her own terms and better the lives of others living with SCI. http://www.kellybrushfoundation.org