Volunteers sponsored by SPIE, the international society for optics and photonics, were among hundreds from the science, engineering, and technology community who visited Capitol Hill last week to seek support for programs vital to economic growth. Among their requests were support for a National Photonics Initiative, overhaul of export controls, and easing of restrictions on government employee travel to scientific conferences. 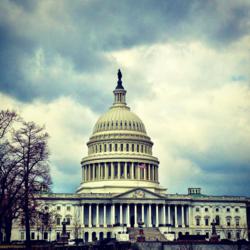 Science, engineering and technology professionals visited their Members of Congress to urge actions that will help strengthen economic competitiveness.

We were able to have very productive discussions emphasizing the urgency for a National Photonics Initiative.

Volunteers sponsored by SPIE, the international society for optics and photonics, were in Washington, D.C., last week to thank Congressional representatives for recent support for photonics R&D and to urge future support for in several key areas vital to economic growth and scientific progress. They were among more than 250 scientists, engineers, and business leaders visiting Capitol Hill 12-13 March for a Congressional Visits Day (CVD) sponsored by the Science-Engineering-Technology (SET) Work Group.

The volunteers said they were pleased with the results of their visits and the reception they received on Capitol Hill. Members and staff were generally in agreement that now is a critical time for the U.S. to be prioritizing investments in science and innovation and that while control of spending is important, funding for R&D and for STEM education are important ways to grow the economy.

"I appreciate the preparations by SPIE to support those of us working in photonics to succinctly bring our message to our representatives in Congress,” said Jim McNally, director of operations at Applied Technology Associates. “The background materials and coaching tips provided really help us to clearly and concisely articulate the critical priorities to support our nation's competiveness and innovation edge. We were able to have very productive discussions emphasizing the urgency for a National Photonics Initiative."

Ben Franta, a student at Harvard University, called the event “an eye-opening experience. In the same way that being a scientist or engineer is very different from what most other people imagine it to be, our government operates in a way that's different from what we might expect by watching or reading the news.”

Franta said the CVD program was “a valuable opportunity to engage with our lawmakers in a way that can lead to real results. To me, the fact that SPIE makes such great use of this opportunity -- both to communicate with Congress and to educate students like me -- shows a forward-looking approach to promoting technologies in optics and photonics in this country and throughout the world." (Read more first-hand observations in an interview with Franta on the Harvard School of Engineering and Applied Sciences website: https://www.seas.harvard.edu/news-events/press-releases/capitol-gains.)

An evening reception provided an informal opportunity for CVD participants to talk with Congressional members and staff, and included an exhibition in which company representatives demonstrated products based on discoveries and innovations resulting from federal R&D funding. SPIE co-sponsored a booth highlighting the recent National Academies report, “Optics and Photonics: Essential Technologies for our Nation,” and raising awareness of efforts to create the NPI.

At the reception, the SET George E. Brown Award was presented to Representatives Mike Honda (D-California) and Richard Hanna (R-New York), to recognize their outstanding efforts to advance and promote science, engineering, and technology on Capitol Hill.

More than 50 percent of all industrial innovation and growth in the United States since World War II can be attributed to advances pioneered through scientific research, with publicly funded R&D the vital foundation for today’s scientific and technological progress.

Technology transfer from academic research adds billions of dollars to the economy each year and supports hundreds of thousands of jobs.