Story-Telling Icon Alex Haley Told This Author "...Your Story Begins Where 'Roots' Ended" -- "The Battle of a Daytime Nightmare" by Dr. Thelma Battle-Buckner

It took the now 80-year-old Thelma Battle-Buckner over 27 years and numerous travels back to the Southlands of Mississippi to pen her family's history-rich story, finally bringing a sense of near-closure to the daytime nightmare with which she had suffered since the age of twelve. 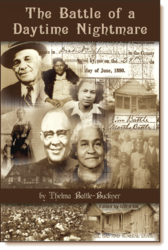 Alex Haley and I met again in January 1992 at the Hilton Hotel, when he was the speaker for an Urban League breakfast, about three weeks before his death. ...He said, "Finish the book because it sounds like your story starts where 'Roots' ended."

Thelma Battle-Buckner has chronicled a rich and arresting family history in her forthcoming literary offering, "The Battle of a Daytime Nightmare," which is due out April 26, 2013, the author's 81st birthday. She stitches together, brilliantly, a dazzling tapestry of her family’s will to overcome whatever obstacles life’s circumstance placed before it. The Battle of a Daytime Nightmare is a breathtaking account of Dr. Buckner and her family’s journey from 1830 'til now—with a surprising connection to one of today's corporate giants. Her narrative exemplifies unity. It is rife with pleasant and stormy unpleasant surprises. It is penned in the plain and poetic speech, style and spirit of her culture. In some ways, the Battle-Buckner story amounts to a sharply focused snapshot of the travails of Black America, of “Making way out of no way.” The substance of her life flows broad and low like a good Sunday morning sermon; it speaks of work, ties, struggle, joys, victory, religion, music and undying love, not only for her family, but for humans at large.

"During the early spring of 1987, after twenty years of research for this story, I had the great pleasure of meeting Alex Haley in the Twin Cities. We met twice total; once at the Channel 5 TV station. While we were in the green room, we talked about my research. I asked him if he thought I was taking too long. He said, “No, it takes a long time to find the truth and tell it.”

We met again in January 1992 at the Hilton Hotel, when he was the speaker for an Urban League breakfast, about three weeks before his death. As he was signing his name on my printed program, he stopped to look at me and said, “I remember you from Channel 5 TV. Don’t stop. Finish the book because it sounds like your story starts where 'Roots' ended.” So, I was determined to complete the research.

I am not angry with anyone. I just continue to become uneasy when I talk about this situation of what happened to my parents on my 12th birthday."

The saga is of a family of sharecroppers (often unpaid) and landowners; of dreamers and leaders who were motivated by a driving spirit to become something better than they were at the moment. Today, the Battle-Buckner clan spans across America, from Mississippi, Alabama and other southern locals to Illinois, Ohio, Minnesota and places beyond. The family’s kinship network through marriages and great migrations is astounding. There may be as many as 300 identifiable family members in Minnesota alone.

Richly inspired by Battle-Buckner's very touching, historically-relevant story, Beverly Black Johnson, founder of Gumbo for the Soul Publications, decided to dedicate a special book series, 'Voices of Wisdom,' to stories that can only be told by a seasoned generation of history tellers—80 years of age and beyond.

"Dr. Thelma Battle-Buckner's life's work and ministry should be revered as one of a pioneer likened to Harriet Tubman. Her EPIC journey—above and beyond this book—is phenomenal," Johnson commented. "The Battle of a Daytime Nightmare" rips apart the fabric of America at its very seam. Once you read this book you will never be the same!"

Bruce George (Peabody and Tony Award winner), co-founder of Russell Simmons' Def Poetry Jam on HBO is Director of Business Development for Gumbo for the Soul International. He is the catalyst and producer behind this first assimilation of the new Gumbo for the Soul International 'Voices of Wisdom,' book series: "The Battle of a Daytime Nightmare."

George commented, "Dr. Thelma Battle-Buckner epitomizes what it is to turn one's struggle into a rallying-cry towards social activism. Her book "The Battle of a Daytime Nightmare" is a historical window into her plight and triumph."

ABOUT THE AUTHOR:
Although there is no legal documentation (recorded birth certificate), Thelma Battle-Buckner is the ninth of 13 children born to Nathan and Bessie Battle, in the Deep South. She graduated from high school in 1949; married in December, 1950; then moved to Minnesota in 1952.

As a professional singer, she was a member of the Premiers Gospel Singers (Saint Paul, MN) as well as the lead vocalist for the Chariottes Gospel Singers of the Twin Cities. From 1957 to 1967, Thelma appeared on a monthly television show sponsored by the University of Minnesota called "Music and Man," produced by Emily Prey. She played piano for the church, sang on a Gospel radio station and appeared on television for 35 years for "Your Church of the Air," KSTP Channel 5, Twin Cities, MN. Battle-Buckner also acted and sang at the Cricket Theater in 1993 and the Illusion Theater in 1995; and performed the story of her life at the Ordway Theater in 1996.

The author has lived a remarkable life with grace—as a worker, musician, preacher, unpaid social worker, and mother of eight children. Next to the God she serves, her children are the center-post of this endearing life.