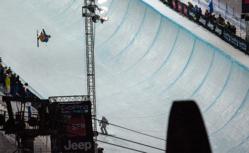 In Women’s Snowboard Slopestyle, Monster Energy teammates Silje Norendal and Jamie Anderson took the top two spots. In perhaps the most progressive and competitive Women’s Snowboard Slopestyle to date, Norendal earned gold with a clean run that included a switch 50-50 to fronstide boardslide, switch backside 540, frontside rodeo 540, and a Cab 720, a trick she just learned. Meanwhile, Anderson’s silver is her eighth medal in slopestyle, a huge achievement considering she’s only 22 years old.

Monster Energy also scored two podium spots in Men’s Ski SuperPipe—Dave Wise bagged the silver and his teammate Kevin Rolland took the bronze. Wise—the newest member of the Monster Energy team—and Rolland—the homeland favorite recently back from and an ACL injury—fought it out with huge, clean runs, both finishing their seasons strong.

On Friday night, Iouri “I-Pod” Podladtchikov provided one of the most definitive Winter X moments when he landed the first ever Cab double cork 1440 in Men’s Snowboard SuperPipe. It’s a trick he developed on Monster Energy’s exclusive training airbag, and something he’s focused on for the last three months. Immediately afterwards and overcome with excitement, he threw his helmet, googles, and his board into the crowd. Check it all out here: http://tiny.cc/x8jbuw

In Real Ski Backcountry, Parker White’s 90-second video part full of hand-built jumps and a wide variety of features earned him the bronze. He upped the creativity by scoring his own edit, creating the music with the help of his friend from Nashville, Taylor Brown. Make sure to check out White’s entry on ESPN’s site now: http://tiny.cc/8n48tw

Peetu Piiroinen took bronze in Men’s Snowboard Slopestyle, sending it huge on the jumps. “I’m stoked with my medal,” he said. “It's really hard to get onto the podium at X Games... I'm super happy with this result at the last competition of the season.”

Over in Men’s Ski Slopestyle, Jossi Wells bagged the silver. Originally an alternate for the event and later qualifying first, he was the last rider to drop and needed a big score on his final run to medal. Under pressure, he scored a big 93.00 to take the podium spot.
Wells said, "I'm super hyped right now. I haven't been able to land my run in slope for a while now…I had to basically throw the hardest run I've done in a slopestyle event.”

Go to http://www.monsterenergy.com and http://facebook.com/monsterenergy for more from X Games Tignes 2013, including links to all the footage, exclusive photos, and videos from the week’s action.